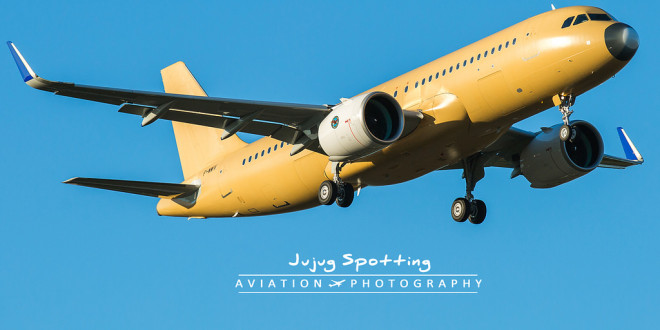 IndiGo A320neo MSN6720. Copyrighted image used with permission. Do not reproduce or copy.

India’s largest domestic airline is set to become the second operator globally of the new Airbus A320neo (new engine option) aircraft, and the first in Asia.

The carrier today released a statement confirming that it will take delivery of a total of 24 new aircraft, three till end March 2016 and 21 in the fiscal year ending March 31, 2017. The airline has orders of 430 of these new aircraft. The neo uses ultra-high bypass turbo-fan engines and winglets Airbus calls ‘Sharklets’, to achieve over 15% fuel savings compared to the current generation ceo (class engine option) A320s. IndiGo has chosen the Pratt & Whitney PurePower PW1100G Geared Turbo Fan (GTF) engine.

The aircraft that most likely are expected to be delivered will be VT-ITC, followed by VT-ITD, and VT-ITE. The status of VT-ITA is not yet known, and VT-ITB will remain with Airbus for some time performing extended testing. Delivery of the neos were delayed due an issue with the engine which seem to have now been resolved.

As per IndiGo’s President and whole-time Director Aditya Ghosh, the airline has signed leases and will take delivery of another seven used A320ceo till November 2016. IndiGo will grow its fleet to 131 aircraft by March 2017 to meet the growing demand in India. During calendar 2015, domestic passenger traffic increased a whopping 21%, one of the highest in the world, and total passengers served by IndiGo increased by 35.5%.

A electronics and automotive product management, marketing and branding expert, he was awarded a silver medal at the Lockheed Martin innovation competition 2010. He is ranked 6th on Mashable's list of aviation pros on Twitter and in addition to Bangalore Aviation, he has contributed to leading publications like Aviation Week, Conde Nast Traveller India, The Economic Times, and The Mint (a Wall Street Journal content partner). He remains a frequent flier and shares the good, the bad, and the ugly about the Indian aviation industry without fear or favour.
@BLRAviation
Previous DFW is first U.S. airport to launch an Apple Watch app
Next Vistara to reconfigure aircraft, boost economy class capacity