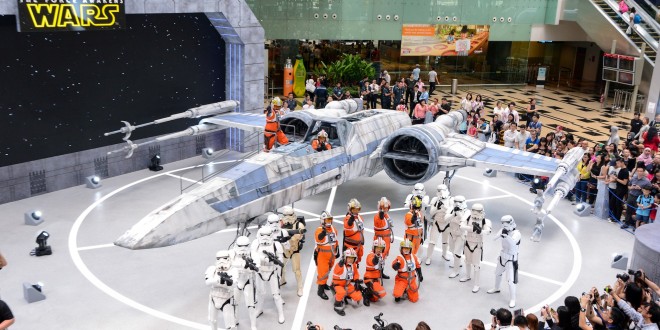 Ahead of the release of the latest edition of famous Star Wars films, The Force Awakens, the X-wing fighter will be featured at the airport’s Terminal 3 departure hall, while five life-sized Imperial StormtroopersTM guard the Galactic Empire’s TIE fighter in the Terminal 2 departure hall.

Every Saturday till January 2, except December 19, there will be appearances by X-wing fighter pilots and Imperial Stormtroopers and a chance to win exclusive merchandise.

Tying this together are the special Star Wars liveried jets of All Nippon Airlines.

Without looking it up on a search engine, do you know what the acronym TIE is in TIE Fighter? Share your answer via a comment.

A electronics and automotive product management, marketing and branding expert, he was awarded a silver medal at the Lockheed Martin innovation competition 2010. He is ranked 6th on Mashable's list of aviation pros on Twitter and in addition to Bangalore Aviation, he has contributed to leading publications like Aviation Week, Conde Nast Traveller India, The Economic Times, and The Mint (a Wall Street Journal content partner). He remains a frequent flier and shares the good, the bad, and the ugly about the Indian aviation industry without fear or favour.
@BLRAviation
Previous Mitsubishi Regional Jet successfully completes maiden flight
Next DGCA report finds Air India operated 787 with only 4 of 47 screws installed