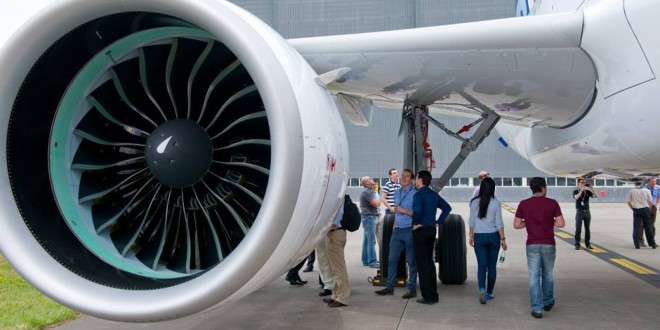 Exactly one year after the first flight of the Airbus A320neo, the first production airframe MSN 6720, made its maiden flight. This particular airframe is destined for IndiGo as part of the Indian carrier’s 180 A320neo order placed at the Paris Air Show in 2011.

While MSN 6720 is the first production airframe, it will not be the first to be delivered to either launch customer Qatar Airways, nor to IndiGo. It will be used for further flight testing and delivered to IndiGo later. Qatar is expecting to receive the eighth A320neo produced, MSN 6772 first, before end of 2015 calendar.

Courtesy of Jujug Spotting, Bangalore Aviation brings you these exclusive photos of MSN 6720. You can see the aircraft painted in plain brown primer. Only the blue Sharklet wing-tip devices betray the IndiGo connection.

The pictures show the increase in the diameter of the engines nacelles. The ultra-high bypass ratios of the new engines are at the core of the 15% fuel burn improvement expected on the neo (new engine option).

The new engine sizes also explain the challenges the much lower Boeing 737 faces for its re-engine efforts for the MAX.

Boeing puts the customer code in the aircraft model sub-type, but Airbus assigns sub-types by engine. A320-271N is the sub-type assigned to airframes powered by the Pratt & Whitney PurePower 1100G geared turbo-fan (GTF) engines, specifically the PW1127G-JM. Those fitted with the CFM LEAP-1A26 power-plants are assigned A320-251N.

The current generation A320s of IndiGo are powered by the International Aero Engines V2500 units and have a sub-type A320-232.

A electronics and automotive product management, marketing and branding expert, he was awarded a silver medal at the Lockheed Martin innovation competition 2010. He is ranked 6th on Mashable's list of aviation pros on Twitter and in addition to Bangalore Aviation, he has contributed to leading publications like Aviation Week, Conde Nast Traveller India, The Economic Times, and The Mint (a Wall Street Journal content partner). He remains a frequent flier and shares the good, the bad, and the ugly about the Indian aviation industry without fear or favour.
@BLRAviation
Previous India orders 22 Apache and 15 Chinook Helicopters
Next Infographics: India domestic airlines’ performance for August 2015