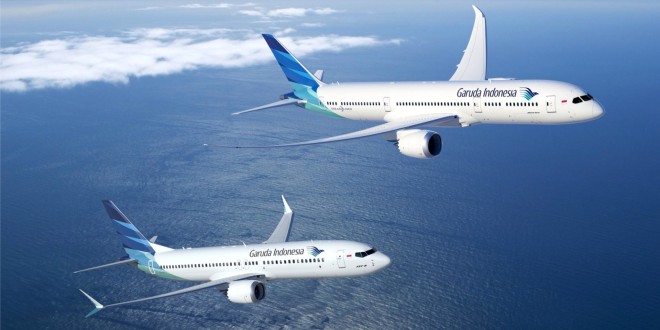 National carrier Garuda Indonesia has announced its intent to purchase 30 Boeing 787-9 Dreamliners, as well as up to 30 737 MAX 8 airplanes. Boeing will officially post this order to its orders & deliveries website once the airline finalises the order.

In addition to the announcement today, the flag carrier also reconfirmed its intent to purchase 50 737 MAX 8s, originally announced in October 2014. The Skyteam member currently operates more than 90 Boeing airplanes, including Next-Generation versions of the 737, 777-300ERs and 747-400s.

The carrier has also signed a letter of intent with Boeing’s competitor Airbus for 30 A350 XWB aircraft. Though the variant has not been disclosed. It is suspected to be the A350-900.

The airline has been undergoing a transformation program, which aims to grow the fleet to 185 aircraft by 2015. Garuda has achieved Skytrax’s 5-star airline rating, ranked as the 7th best airline in the world in 2014, and awarded “The World’s Best Cabin Crew” award in 2014 and “The World’s Best Economy Class” award in 2013, by Skytrax.

A electronics and automotive product management, marketing and branding expert, he was awarded a silver medal at the Lockheed Martin innovation competition 2010. He is ranked 6th on Mashable's list of aviation pros on Twitter and in addition to Bangalore Aviation, he has contributed to leading publications like Aviation Week, Conde Nast Traveller India, The Economic Times, and The Mint (a Wall Street Journal content partner). He remains a frequent flier and shares the good, the bad, and the ugly about the Indian aviation industry without fear or favour.
@BLRAviation
Previous Air Pegasus to launch Bangalore Madurai flights
Next Exclusive photos: Vistara’s inaugural flight to Bangalore