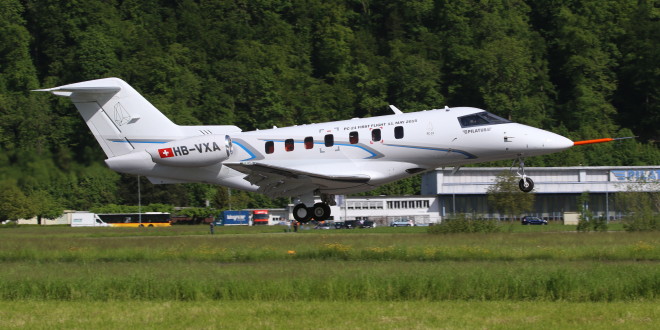 Pilatus PC-24 takes off for it's maiden flight. Pilatus Image.

Swiss air framer Pilatus successfully carried out the maiden flight of it’s new business jet the PC-24 yesterday. Prototype P01, which bears the registration HB-VXA took off from the company’s headquarters at Buochs Airport in front of around 1800 Pilatus staff. The aircraft flew for 55 minutes before returning to the airport. The aircraft was flown by Pilatus test pilots Paul Mulcahy and Reto Aeschlimann.

The PC-24 is the world’s first business jet to be equipped with a cargo door as standard. It’s design will allow it to operate from very short and even unmade runways. It is powered by two Williams FJ44-4A turbofan engines.

Three PC-24 prototypes will be used to complete a test program of some 2,300 hours over the next two years. Certification and initial deliveries are planned from 2017.

A frequent flyer for both work and pleasure - Vedant has held elite status on many of the major alliances and airlines. Also an avid aviation photographer, his pictures have been published in and on the covers of many international publications.
@TheVedic
Previous Qatar Airways to operate high density Airbus A340-600
Next VivaAerobus takes delivery of the first of 52 aircraft