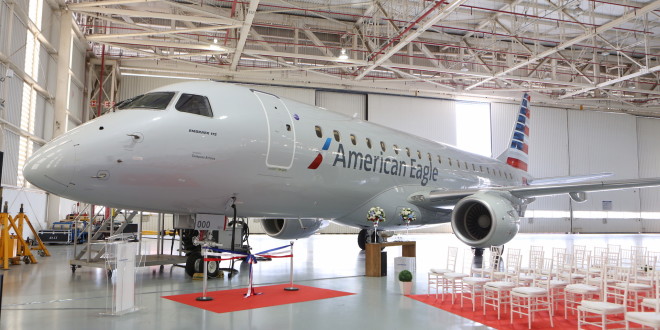 American carrier American Airlines has taken delivery of it’s first Embraer E175 E-Jet. The aircraft which is the first in an order for 60 E175s was delivered at a ceremony held at Embraer’s headquarters in São José dos Campos.

The aircraft will be operated by Compass Airlines under the American Eagle brand. Compass will operate the first 20 E175s of American Eagle. The E175s will be configured with 12 First Class, 20 Main Cabin Extra and 44 Main Cabin seats, for a total of 76 seats.

“There are many E175s already flying in the U.S. market in the colors of the new American, but the delivery of the first aircraft purchased directly by American, and to be operated by Compass, is a special moment for Embraer and its employees, Embraer and American have enjoyed a long strategic partnership, built by the operational success of the ERJ 145 aircraft family. Now, we are very confident that the same success will be achieved with the E175.”

“The E175 is an important part of American’s fleet renewal, providing us the right size aircraft for the right routes, With a two-class cabin and Wi-Fi connectivity, these modern and efficient aircraft ensure our customers have a seamless transition between regional and mainline flights on the largest network in the world.”