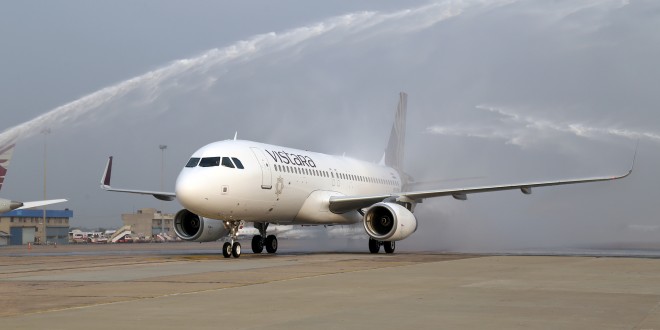 Vistara the brand of Tata Singapore Airlines joint-venture company Tata-SIA Airlines Ltd., had a successful inaugural flight earlier this morning. Flight UK890 took off from Terminal 3 Indira Gandhi airport in New Delhi and became the first domestic airline to commence operations at Terminal 2 of Chhatrapati Shivaji airport after it landed on runway 14.

The minister of state for civil aviation Dr. Mahesh Sharma cut the ribbon at boarding gate 37 in the presence of the senior dignitaries, including a host of senior executives from the parent companies.

Mr. Prasad Menon was handed over the first boarding pass.

In a noble gesture Vistara took a group of very excited children from the Salaam Baalak Trust aged between 7-12 years, who were boarded on the aircraft first to enjoy their first flying experience ever. The airline used the Twitter hashtag ‘Fly the New Feeling’.

For more on Vistara including high resolution photos, click here

A electronics and automotive product management, marketing and branding expert, he was awarded a silver medal at the Lockheed Martin innovation competition 2010. He is ranked 6th on Mashable's list of aviation pros on Twitter and in addition to Bangalore Aviation, he has contributed to leading publications like Aviation Week, Conde Nast Traveller India, The Economic Times, and The Mint (a Wall Street Journal content partner). He remains a frequent flier and shares the good, the bad, and the ugly about the Indian aviation industry without fear or favour.
@BLRAviation
Previous BREAKING: First cabin pictures of Vistara premium economy class
Next Vistara airlines: Cabin pictures – business, premium economy, economy