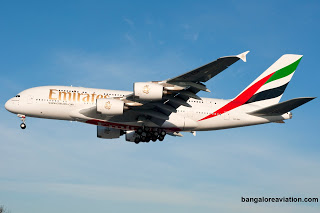 The flight will be operated by another A380 in a three class configuration 14 first class suites, 76 lie-flat business class on the upper deck, and 399 economy class seats on the lower deck.

Emirates first flew to New York in June 2004 and since then has flown over 4.5 million passengers on the route. The fourth flight is targeted to connect with customers in Africa, India and the middle-east from Dubai. From New York, Emirates intends to leverage its 2010 code-share agreement with JetBlue Airways (B6) and offer connectivity to points within North America. At JFK airport, JetBlue operates from Terminal 5 and Emirates from Terminal 4.

A electronics and automotive product management, marketing and branding expert, he was awarded a silver medal at the Lockheed Martin innovation competition 2010. He is ranked 6th on Mashable's list of aviation pros on Twitter and in addition to Bangalore Aviation, he has contributed to leading publications like Aviation Week, Conde Nast Traveller India, The Economic Times, and The Mint (a Wall Street Journal content partner). He remains a frequent flier and shares the good, the bad, and the ugly about the Indian aviation industry without fear or favour.
@BLRAviation
Previous Opinion: Phased abolishment of 5/20 rule will be fair to all Indian airlines
Next Etihad to add third daily from New Delhi and Mumbai and commence Kolkata