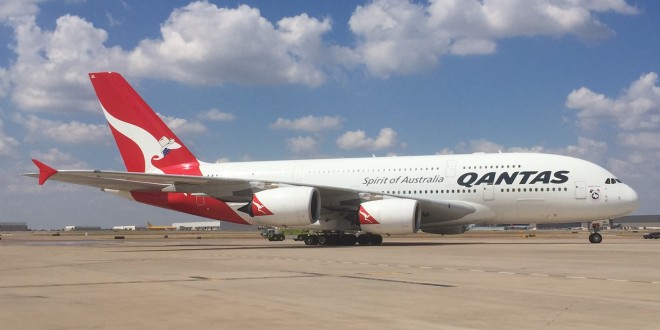 Qantas A380 VH-OQL Phyllis Arnott on its first flight to Dallas-Fort Worth airport. Photo courtesy the airport.

Qantas and Emirates commence A380 service to Dallas-Fort Worth

In quick succession Dallas-Fort Worth Airport has joined the major leagues of Los Angeles, New York JFK, Washington Dulles, Miami, San Francisco, Houston Intercontinental, and Atlanta as an airport that receives Airbus A380 super-jumbo services. And not just just from one but at least two international carriers, as both Australia’s Qantas and Dubai’s Emirates airline commenced ultra-long haul services connecting the Texan city to Sydney and Dubai respectively.

Qantas used to operate a Boeing 747-400ER on QF7 and QF8, at 8,578 miles (13,804 km), the world’s longest non-stop flight between Sydney and Dallas-Fort Worth. Due to range limitations of the Boeing 747-400ER, on the return flight, QF8 used to make a stop for re-fuelling. Effective September 29, Qantas has upgraded this flight to the A380 super-jumbo which will fly non-stop in both directions six days a week, except Tuesdays.

The A380 to DFW VH-OQL Phyllis Arnott painted in a special livery with the Qantas Kangaroo wearing a good old 10 gallon cowboy hat and a logo near the door proclaiming “G’day Texas” arrived on runway 18 left and received the traditional water cannon salute from the ARFF team.

The airline has introduced “Texan” food and as a special gesture, Dr. Pepper soft drinks which hail from the metroplex. The Qantas A380 is configured in a four class cabin. F14C64W35Y371 14 newly designed first class suites by Marc Newson. 64 flat-bed business class, 35 premium economy, and 371 economy class.

The schedule is very similar to the existing service.

Expect Qantas to leverage its DFW service with oneworld partner American Airlines for whom DFW is their biggest hub.

On October 1, Dubai based Emirates airline also commenced an A380 service to Dallas-Fort Worth. A6-EET completed a 15 hour 39 minute flight as EK221 to be received by the water cannon salute of the DFW ARFF.

The Emirates schedule is very similar to the previous Boeing 777-200LR service, though flight times on the A380 are reduced a little.

Though officially the distance between Dubai and DFW is 8,040 statute miles, most times the onward flight flies about 8,450 sm following an extremely northern routing due to winds as this flight track from FlightAware shows. On this day the flight took 15 hours and 51 minutes to complete.

Many passengers, especially from India, will rejoice as they will no longer be cooped up for this ultra-long-haul flight in the narrow 17 inch economy class seats that the airline offers on its Boeing 777s that previously operated this route. The A380 features 18 inch wide seats.

Emirates offers a three class configuration. 14 first class suites, 76 flat bed business class and 399 economy class. All the premium classes are on the upper deck and all the economy is on the lower.

A electronics and automotive product management, marketing and branding expert, he was awarded a silver medal at the Lockheed Martin innovation competition 2010. He is ranked 6th on Mashable's list of aviation pros on Twitter and in addition to Bangalore Aviation, he has contributed to leading publications like Aviation Week, Conde Nast Traveller India, The Economic Times, and The Mint (a Wall Street Journal content partner). He remains a frequent flier and shares the good, the bad, and the ugly about the Indian aviation industry without fear or favour.
@BLRAviation
Previous Video: Qantas Boeing 767 retirement featured on CBS show 60 Minutes
Next Route dispersal guidelines: the anguish of airline network planners