Emirates may suspend A380 operations to Mumbai?

Five minutes after we published our original story, an Emirates spokesperson sent us this statement [bsu_quote cite=”Emirates spokesperson”]Emirates will continue to operate its iconic A380 aircraft on the Dubai-Mumbai route for the remainder of the summer 2014 timetable as planned, as flight numbers EK500/EK501. Details of the airline’s winter timetable which is due to commence on 26 October are still being finalised and further information will be shared later this month.[/bsu_quote] For the information of readers we had waited over three hours before publishing the story.

Just about three months after it started its first scheduled Airbus A380 super-jumbo service to India, gulf major Emirates may suspend its lone A380 flight to India.

The Dubai-based airline, the largest operator of the A380, had up-gauged its EK500 and EK501 flights from July 21 to an A380. From the winter schedule which commences October 26, 2014, the airline’s website shows the flight being returned back to the earlier Boeing 777-300ER service. 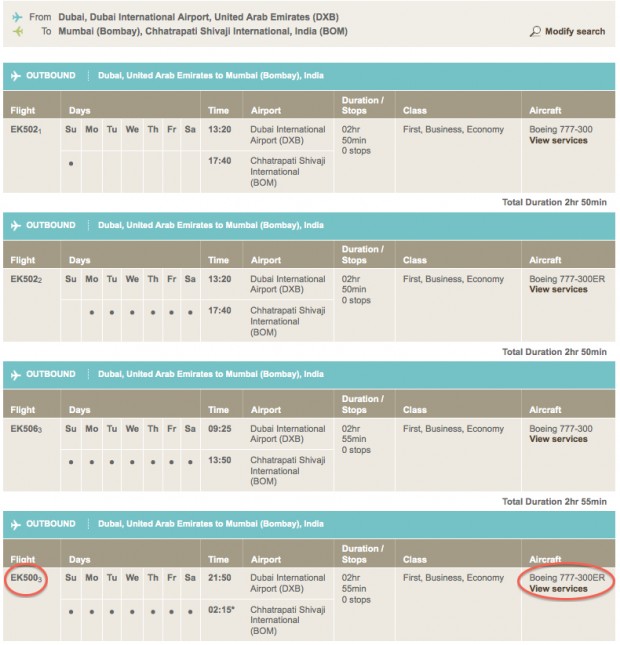 The move is extremely surprising considering the service is just three months old. While the airline has still not responded to our request for a comment, the natural assumption is that Emirates is not achieving the required loads, however, the reason could also lie elsewhere. Stay tuned for our next story.

A electronics and automotive product management, marketing and branding expert, he was awarded a silver medal at the Lockheed Martin innovation competition 2010. He is ranked 6th on Mashable's list of aviation pros on Twitter and in addition to Bangalore Aviation, he has contributed to leading publications like Aviation Week, Conde Nast Traveller India, The Economic Times, and The Mint (a Wall Street Journal content partner). He remains a frequent flier and shares the good, the bad, and the ugly about the Indian aviation industry without fear or favour.
@BLRAviation
Previous Air India refutes TimesNow TV report on Air India Day extravaganza
Next Lufthansa to commence A380 operations to both Mumbai and New Delhi this winter?