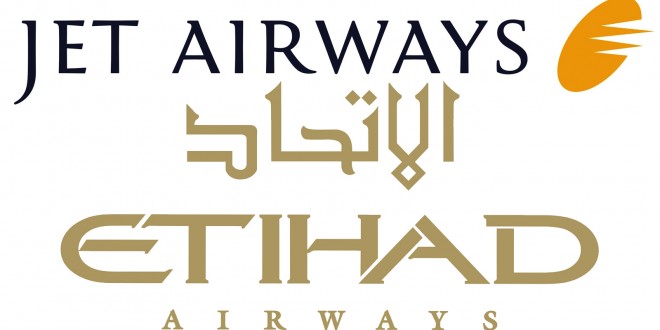 India’s largest private carrier Jet Airways has expanded its code-share partnership with Etihad Airways which holds a 24 percent stake in the former.

The agreement will allow Jet passengers from India to connect on to flights on the Etihad network via Abu Dhabi to European destinations including, Amsterdam, Brussels, Düsseldorf, Dublin, Frankfurt, Geneva, Manchester, Milan, Munich, and Paris, to north American destinations such as Chicago, New York (JFK) and Washington Dulles. Other destinations include Johannesburg and Nairobi in Africa, and Brisbane in Australia via Singapore.

Jet Airways will places its flight code 9W on flights operated by Etihad Airways, between Abu Dhabi and India destinations Ahmedabad, Bangalore, Calicut, Chennai, Delhi, Hyderabad, Mumbai, Kochi and Trivandrum. Etihad Airways places its code EY on Jet operated flights between Abu Dhabi and Mumbai, Delhi, Cochin, Bangalore, Hyderabad and Chennai. This increases the frequency and capacity for both the airline between Abu Dhabi and India. The code-share also enables Etihad passengers to access Jet’s services to Singapore, Hong Kong and Bangkok, though it is difficult to understand why any passenger would choose a transit stop in India when Etihad already operates direct flights to these destinations from Abu Dhabi.

Frequent flyer members of Jet Privilege and Etihad Guest can earn and redeem miles across the global networks of both airlines. Elite level members of both programs will enjoy the same extended reciprocal benefits like baggage, lounge access, priority boarding etc., when travelling on flights operated by both carriers.