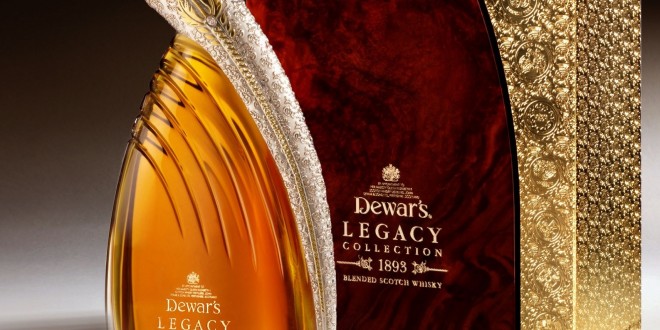 The retailer, a joint venture company between DIAL (Delhi International Airport Limited) and Yalorvin Limited a subsidiary of Aer Rianta International cpt., will be the first duty free in India to sell this special limited edition blended Scotch whisky which commemorates the first Royal Warrant awarded to DEWAR’S 120 years ago. The DEWAR’S Legacy 1893 release has been skilfully blended from 20 rare and long-aged whiskies, many of which were used by Dewar’s founder, John Dewar.

Presented in a hand-blown crystal decanter with hand-crafted silverware, the design is inspired by the dirk, the Scottish ceremonial dagger. The dirk is decorated with a thistle motif with detailing in 22-carat gold, and has as its centrepiece nine sapphires inspired by the famous Stuart Sapphire, owned by many Scottish kings before it became part of Queen Victoria’s Imperial State Crown. The decanter is housed in a burr walnut and gold metal box, which displays some of the many prestigious awards won by Dewar’s.

Only 1,000 individually numbered bottles of the whisky will ever be released. Unfortunately, the company’s release did not provide any prices.

Serve neat or with a dash of water and savour its complex flavours. The palate is rounded, creamy and sweet, with enticing flavours of vanilla, toffee and mature oak, balanced with complex-yet-delicate aromatic spices and coconut aromas. Each mouthful reveals dried fruit cloaked in a wisp of smoke.

A electronics and automotive product management, marketing and branding expert, he was awarded a silver medal at the Lockheed Martin innovation competition 2010. He is ranked 6th on Mashable's list of aviation pros on Twitter and in addition to Bangalore Aviation, he has contributed to leading publications like Aviation Week, Conde Nast Traveller India, The Economic Times, and The Mint (a Wall Street Journal content partner). He remains a frequent flier and shares the good, the bad, and the ugly about the Indian aviation industry without fear or favour.
@BLRAviation
Previous Video: Cessna makes emergency landing on national highway near Bhopal
Next India terminates the VVIP chopper deal with Augusta Westland