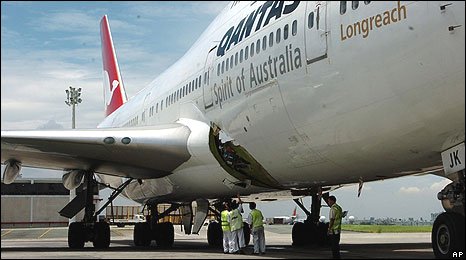 MANILA (AFP) — A Qantas Boeing 747 flying to Melbourne made an emergency landing in Manila on Friday after a dramatic mid-air rupture that left a “gaping hole” in its fuselage, officials and passengers said.

Stunned passengers reported how the jumbo, which originated in London and made a stop in Hong Kong, plunged 20,000 feet (6,000) metres in an “absolutely terrifying” ordeal.

A Qantas spokeswoman said the plane, carrying 346 passengers and 19 crew, diverted to Manila where it was now undergoing inspection on the ground.

“There was a terrific boom, and bits of wood and debris just flew forward into first (class) and the oxygen masks dropped down,” June Kane, a passenger from Melbourne, told the Australian Broadcasting Corporation.

“We were told that one of the rear doors, a hole had blown into it, but I’ve since looked at the plane and there’s a gigantic gaping hole in the plane. “It was absolutely terrifying, but I have to say everyone was very calm,” she added, speaking from the Philippine capital.

Qantas chief executive officer Geoff Dixon said initial inspections showed the aircraft had sustained a hole in its fuselage, and it was currently being inspected by engineers. He said the flight crew performed emergency procedures after oxygen masks were deployed and there were no reports of any injuries. Dixon said the Australian Transportation Safety Bureau and Civil Aviation Safety Authority had been notified.

Manila airport operations officer Ding Lima said the aircraft lost cabin pressure shortly after leaving Hong Kong bound for Melbourne. “The captain of the aircraft immediately called the (Manila) control tower for an immediate landing,” Lima told local radio. “There is a big hole in the belly of the aircraft near the right wing about three metres in diameter,” he added.

Flight QF30, which took off from Hong Kong at 9:00am (0100 GMT), had been due to arrive in Melbourne at 1145 GMT, according to the Qantas website. Lorena Dimaya, a Qantas assistant supervisor in Manila, said the aircraft had landed safely just after 11:00am local time and the incident had not been “life threatening.” She said the plane had taken off from Hong Kong when it “encountered some technical problems and requested to be diverted to Manila, where it made an emergency landing.”

Passenger June Kane said the problem seemed to centre on the baggage compartment of the plane. “I’m looking at the plane now and on the left-hand side, just forward of the wing, there’s a gaping hole from the wing to the underbody,” she said. “It’s about two metres by four metres and there’s baggage hanging out so you assume that there’s a few bags that may have gone missing.

Passengers praised the crew for landing the plane safely. “We heard a very large bang, the oxygen masks came out. But the crew was very calm and everything was fine,” said Phil Rescall, a 40-year-old man from England travelling to Australia for work. “I think we were all very lucky.”

“The crew were terrific, they did a great job,” another passenger, Brendan McClements, said. “Everyone gave them a round of applause as we landed.”