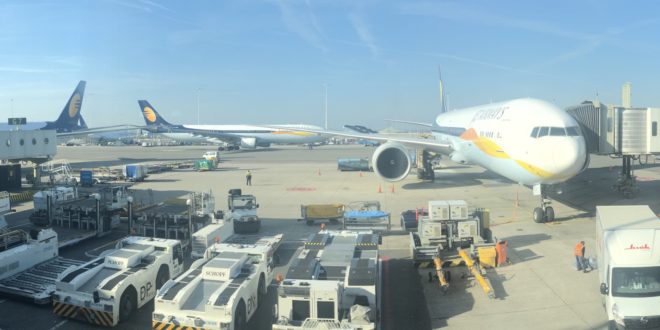 Continuing from yesterday, when the airline cancelled its international flights from Bangalore and Chennai. Jet Airways now appears to have cancelled all its flights to London, Paris and Amsterdam.

All flights to the above cities have been cancelled for today, they are currently showing as scheduled for tomorrow. However, it is uncertain that Jet will be able to resume these flights in its current condition.

The airline has also cancelled all of its Bangalore flights. Jet did not operate any flights from Bangalore yesterday and shows all flights scheduled for today and tomorrow cancelled.

The last count indicates that the airline may not have any operational 737s in the fleet that can operate domestic flights from Bangalore. Jet’s domestic fleet now appears to have mainly been reduced to its ATR-72s.

A frequent flyer for both work and pleasure - Vedant has held elite status on many of the major alliances and airlines. Also an avid aviation photographer, his pictures have been published in and on the covers of many international publications.
@TheVedic
Previous SpiceJet to lease 16 additional 737-800’s
Next BIAL announces 120% increase in UDF for next four months