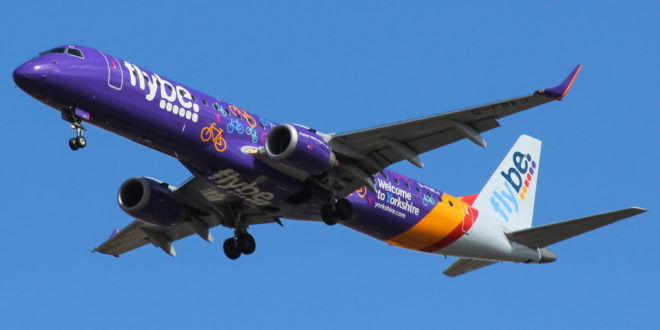 Flybe, Europe’s largest regional carrier which flies 53% of all fights within mainland Britain (excluding London) and also the largest scheduled airline by air traffic movements at 13 UK airports, recently announced a sale to a consortium.

This in part is driven by the uncertainty emanating from Brexit and also other structural issues.

Flybe planned ahead and undertook an aggressive capacity adjustment where capacity was decreased by 9% in H12018 to address demand patterns. Concurrently there was a focus on revenue initiatives and indeed passenger revenues per seat for H12018 were higher by 7.9%. However, total costs increased by 5.9% and thus the impact was seen on profitability.

With Brexit looming and no certainty on outcome cost escalations due to regulatory issues, currency fluctuation and fuel price increase going forward make for a challenging situation.

An excerpt from Flybe group PLCs interim management report  states, “Brexit remains a major uncertainty for the sector and the wider economy.”

A quick glance at the airline’s financials highlights that the net cash flow from operating activities was negative 15.2 million pounds in H12018, and operating cost per seat increased by 2.7%.  Fuel which is a large driver of costs increased by 8%.

While Flybe does hedge its requirement for fuel and as of September 2018 was 90.8% hedged there was a drastic reduction in fuel prices after this date (the price at which the hedges have been entered into are not known but this could also be a potential impact on profitability).

Free cash position of the airline also showed changes and as of H1 2018 it had 70.6 million pounds in cash which was 30.3% lower than first half of 2017. Additionally, the restricted cash went up and this is likely due to collateral guarantees on credit card transactions as disclosed in the report.

Overall, liquidity had started showing a trend where a proactive focus on cash was the need of the hour which is exactly what this transaction enables.

The deal involves a consortium called Connect Airways which will become the new owner of Flybe. The deal is structured as an all cash offer making it very attractive. The combined group will operate independently and the ownership will be 40% by Cyrus Capital Partners, 30% by Stobart Aviation and 30% by Virgin Atlantic. It is likely that Cyrus Capital Partners at some point in the future want an exit whereby Stobart or Virgin will likely be given the opportunity to increase the shareholding.

The deal brings with it cash which will help strengthen the business. This will be in the form of a bridge loan facility of £20 million pounds towards ongoing working capital and operational requirements full stop and an additional 80 million pounds of further funding will also be provided.

It also helps minimize network risk exposure of Stobart Air which at this point is operating flights on behalf of Aer Lingus partners in Ireland. The leasing arm of Stobart will also bring in additional expertise that can help with further fleet reallocations and restructuring.

In due course, Flybe will be rebranded to Virgin Atlantic which will provide critical regional feed to the Virgin Atlantic network which is evidenced by other airlines moving to group structures. For instance, IAG now gets feed from carriers such as Aer Lingus, Iberia, Vueling and LEVEL;  Qatar Airways which now gets feed from Air Italy and other partners; and even Ryanair which provides feed to the long haul network of AirEuropa.

The deal also makes sense for Stobart Air started to diversify from operating exclusively for AerLingus in 2014. In addition, the airline’s leasing arm may also help the consortium.

The Flybe fleet consisted of a mix of regional aircraft mainly Q400s and Embraer 175s/195s. In 2018 the airline announced that the Q400 would form the core of its fleet and consequently decisions were taken to move towards an all Q400 fleet.

This brings with it a few challenges as well as it commits the airline’s network to the range of the Q400s and to the liquidity of the asset type. Operational economics are also more impacted by rising fuel prices due to short effective length (which will be offset by network feed where pricing will be on a segment basis).

Flybe management forecast in the case of the committed acquisition of four Embraer 175 aircraft which are scheduled for delivery between July to December 2019, it does have the flexibility to cancel one or more of the orders however these will trigger penalties.

In this situation, a group structure works well because the aircraft can be absorbed and then transferred to a different operator within Stobart or via Cyrus Capital partners.

Looking forward this seems to be a proactive step by Flybe to ensure the long-term sustainability of the business. CEO Christine Ourmières is very well respected with aviation circles and has indeed announced and executed on a plan for airline’s long term sustainability.

It is unfortunate at external conditions have led to the sale of the airline and on a broader level this perhaps also highlights why the Brexit issue must be addressed in a quick and decisive manner.

Satyendra Pandey is an India market expert and has held a variety of roles across aviation. An author and a certified pilot, his most recent book is titled: Dissonant dispatches: Indian aviation’s emergent flightpath.
@spandey16
Previous The Meghalaya mine rescue operations: can the aviation community do more?
Next Airbus begins construction of A220 production line in America