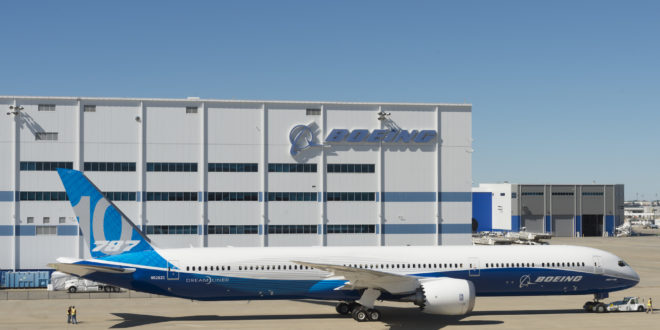 The Boeing 787-10 rolled out at Boeing South Carolina. Boeing Image.

The United States Federal Aviation Administration (FAA) has awarded an amended type certificate (ATC) for Boeing’s largest variant of its next-gen Dreamliner family, the 787-10, clearing it for entering commercial service.

The test program used three aircraft and accumulated over 900 flight hours. The 787-10 is a stretch of the 787-9 and trades payload capacity for range. It can fly about 330 passengers when configured in a typical two-class configuration, and up to 6,430 nautical miles (11,910 km).

The airline has not yet unveiled its LOPA diagrams which will indicate the cabin layout and amenities.

Other aviation regulatory agencies are expected to follow the FAA’s lead and certify the airplane soon.

A electronics and automotive product management, marketing and branding expert, he was awarded a silver medal at the Lockheed Martin innovation competition 2010. He is ranked 6th on Mashable's list of aviation pros on Twitter and in addition to Bangalore Aviation, he has contributed to leading publications like Aviation Week, Conde Nast Traveller India, The Economic Times, and The Mint (a Wall Street Journal content partner). He remains a frequent flier and shares the good, the bad, and the ugly about the Indian aviation industry without fear or favour.
@BLRAviation
Previous Airbus A380 rescue. Emirates orders 36 additional superjumbos for $16B
Next Jet Airways to commence second Bangalore Singapore flight in March