This review was contributed by BangaloreAviation reader Prathik N.P.

Tickets for this journey were booked exactly two months in advance. Emirates offered incredible fares for a round trip. Indigo and Etihad were also considered which were costlier by about 20% and 50% respectively. Considering the convenient flight times (both ways) and the cost, tickets were booked in a jiffy.

The two month wait felt much longer, all thanks to the high expectations I had from Emirates.

I reached the airport at around 7.30 AM. The flight time allows you to get a good amount of sleep for the previous night. The queue at the check in counters were quite long and the whole process took about 20 minutes.

Two flights to Singapore and a couple more to the Middle East (Muscat and Abu Dhabi) meant the immigration and security took considerable time. Another twenty minutes went by. 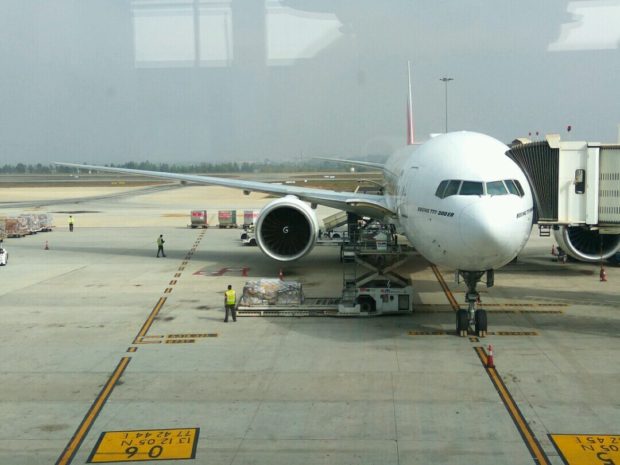 The inbound aircraft was delayed and turned up at the gate at 9.15, seventy minutes before the scheduled departure time. Thus, the departure was pushed to 10.55, a thirty-minute delay. Fortunately, the weather was clear and there were no delays owing to fog, which was quite frequent in the previous few weeks at Bangalore.

Boarding was done from two lines. It began abruptly. There were no announcements. Thus, the queue for Economy grew very very long in just a couple of minutes. Only after ten minutes, one agent took the initiative and called out for boarding based on seat zones. Although he did his best, it did not seem to work. The crowd seemed to board as per one’s own wishes. Not a start I was hoping for. I boarded in the end. Overall, the boarding was haphazard and chaotic.

Though there were a few aircraft ahead of us, it looked like we were given preference and immediately cleared for takeoff.

My seat was the middle one on the left side of the aircraft, not a problem since I was traveling with family. The economy seats on Emirates are quite comfortable. The legroom is very good for a guy who is 5’8. Be warned though, the leg space on the window seat is less due to the IFE box located beneath the seat (you can’t stretch your legs much on it) I did wish the width of the seat was a few inches wider. Can stretch your legs quite comfortably. Should be alright for a flight under 7-8 hours. Would definitely prefer a nine abreast layout compared to the bone crunching ten (3-4-3) abreast layout, which has become an industry norm across the world. A pillow and the headphones were already provided in the seats.

The pillow was not up to mark. The quality was such that you had to be told that a pillow was placed in your seat failing which it is hard to notice. The recline on the seat was decent and seat quality made it a comfortable journey. This flight was full. Could not find a single empty seat when I looked around.

About twenty minutes into the flight, menus were distributed. Asian Vegetarian was the pre-selected option. The veg choices were served first. One interesting aspect about Emirates is that you can get the copy of the menu on the website weeks before the actual flight. I remember looking that up two months in advance. And this was the same menu. I felt that the printing of menu in the local language of the region was a nice touch. Kudos to Emirates for that.

The food was served about twenty minutes after that. The main choices consisted of Butter Chicken or Baingan masala served with Pulao.

Having only had a sandwich for breakfast early in the morning, I was hungry. The wait for the food to be served seemed to test my patience.

Food was served hot. Very hot! So hot that I could not even try to taste the rice or the curry. It was 11.45 IST. My hands first went to the top left of the tray… Rasmalai! Considering how hungry I was and this seemed to be the only option, apart from the bread bun which could be eaten immediately due to the temperature of the food tray. I was delighted to find two pieces of the Rasmalai and not just one. It was very good. Had one and kept the other for the end of the meal.

Coming to the main course, the salad – Aloo chana (Potato and chickpea) chaat was not upto mark and did not taste good. Pulao (Flavored Rice) was served with a brinjal side dish (Baingan masala) and a dry cabbage curry. By then, both the sides and the rice were hot enough to be consumed and tasted excellent with the right amount of flavors. Mango, Apple and Orange juice was offered along with the meal.

Bread and butter were as expected. The pickle was a surprise, it tasted very authentic. Wish they gave me a few extra boxes to take home. A small chocolate and after meal digestives proved to be valuable additions. The cutlery was steel, which is again very commendable for economy class. Coffee and Tea were also served after sometime. It is to be noted here that Emirates does not provide Indian breads, which I personally believe to be a wise choice. The entire meal service was done about about two hours into the flight, which was good considering this flight was full. At this point we had crossed Mumbai and above the Arabian Sea. The seatbelt sign was turned on at this juncture due to mild turbulence.

Overall, a fantastic meal by Emirates. Did not really feel like an airline meal.

The In-flight entertainment by Emirates is world class. The options are huge. Movies, TV Series, music, games, live TV, etc. Very difficult to remember it all. The collection of movies was fantastic and included many recent movies across all genres and languages. The selection of movies across the Indian regional languages was notable. The extra effort here stands apart. I was surprised to find Indian music was not available. Did not really matter on this short flight.

The only problem here were the earphones. The quality was a huge let-down. Using them for more than thirty minutes constantly caused a lot of pain and stress on your ears. This is definitely the one area, which the airline can work on to make the customer experience much better.

The user interface is good. Not much of a lag when changing around constantly. System responds well. The quality of picture from the flight camera on this flight was not clear. Also I was not able to track the flight location in real-time continuously, since the screen kept shifting between speed, altitude, time zones across the world, etc. This was not the case on my return flight!

The free Wi-Fi offered (upto 10MB) for all is again a good move. The speeds were quite slow, as expected. But it was just enough to text and share some photos. Thumbs up for this.

After landing, our bags took over an hour to appear on the carousel. I expected better of Emirates at their home in Dubai.

Emirates clicks all the right boxes here. The costs, food and entertainment. It gets all the basics right. Undoubtedly, a definite consideration for flying them again.