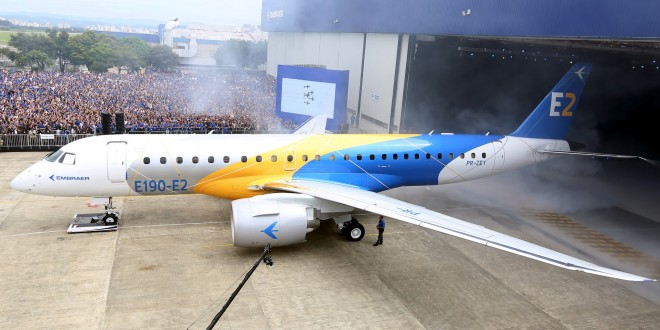 Brazilian manufacturer Embraer revealed the first of its line in second generation airliners at its headquarters, São José dos Campos, Brazil. Belonging to the E-Jets clan, the aircraft is expected to make its first flight in the second half of 2016 with first deliveries to be expected in 2018.

The second generation aircraft uses new Pratt & Whitney PW1900G geared turbofan engines and replaces the aging GE CF34s used in the E1 series and has fly-by-wire flight controls. It has an increased range of 400 nautical miles (740.8 km), with a total of 2,800 nautical miles (5,185 km).

It retains the same number of seats as the previous series’ E190 with 97 seats in two-class service and 106 seats in a single class layout.

Prior to its launch, the program has secured 640 commitments – 267 firm orders and 373 options and has also taken purchase rights from airline customers and chartering companies. Presently, the E-Jets operate with around 70 customers across 50 countries.

The E2 program was launched with an investment of $1.7 billion in June 2013. This aircraft is the first of four with the second one in progress that will be used in the E190-E2 certification. Two additional planes will be added for the E195-E2 campaign, entry into service for which is expected in 2019, and three more will be used in the E175-E2 campaign, which is scheduled to enter service in 2020.

Our dedicated staff at Bangalore Aviation bring you stories from across the aviation world.
@@BLRAviation
Previous Vistara increases its flights 25% to 400 weekly. Additional Bangalore Delhi flight
Next IndiGo becomes first Asian and second global operator of the A320neo