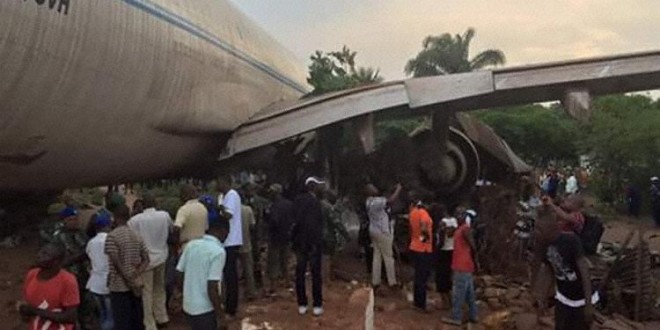 An Airbus A310-300 aircraft registered to Services Air over-ran the runway at Mbuji-Mayi airport in the Democratic Republic of Congo and killed eight people in a residential area just beyond the runway on December 24, 2015. The crew of five were unhurt, but the aircraft is substantially damaged.

As per a report in The Aviation Herald “Witnesses reported the crew had already attempted and aborted two approaches, on the third approach the aircraft touched down about half way down the runway and was unable to stop before the end of the runway and came to a stop on soft ground about 500 meters/1650 feet past the runway end.”

Video of the crash

Normally this story would not have much significance in India, but to us aviation enthusiasts and spotters this accident marks the demise of an aircraft which was first delivered to Air India and served the national carrier for over 25 years.

This particular aircraft an Airbus A300-304 was MSN (manufacturer’s serial number) 413. It first flew on March 7, 1986 and was delivered brand new to Air India on May 29, 1986. Named after the mythical river Saraswati (Air India A310s were named after rivers), it was registered VT-EJI and served in a passenger role till it was converted to a freighter in April 2008, about 22 years later. It was finally sold off three years later in 2011.

It is unknown whether the aircraft will survive the substantial damage. Now almost 30 years old, it might not be cost-effective to repair the plane.

A electronics and automotive product management, marketing and branding expert, he was awarded a silver medal at the Lockheed Martin innovation competition 2010. He is ranked 6th on Mashable's list of aviation pros on Twitter and in addition to Bangalore Aviation, he has contributed to leading publications like Aviation Week, Conde Nast Traveller India, The Economic Times, and The Mint (a Wall Street Journal content partner). He remains a frequent flier and shares the good, the bad, and the ugly about the Indian aviation industry without fear or favour.
@BLRAviation
Previous Airbus delays A320neo delivery to 2016. IndiGo, GoAir fleet plans disrupted.
Next SpiceJet increases frequencies on south India and Kabul routes