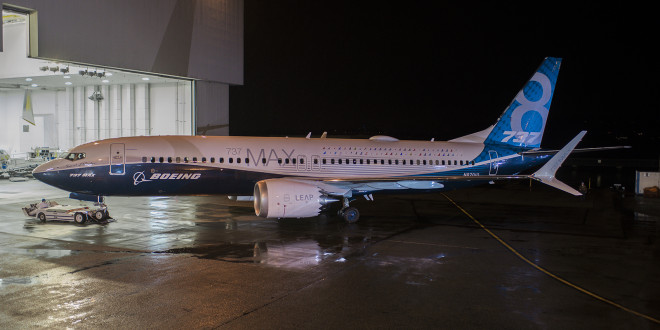 The new 737 MAX 8 rolls out of the paint hangar in Renton. Boeing Image.

Yesterday evening, Boeing rolled it’s first 737 MAX out of the paint hanger in Renton. The aircraft which is the first of the fourth generation of Boeing’s and the world’s best selling commercial aircraft was introduced to the world in front of thousands of Boeing employees.

The aircraft called the Spirit of Renton is wearing the new Boeing MAX livery which is similar to the dreamliner livery but in a teal color and a few design changes. The production-complete airplane rolled out of the Renton factory and into the paint hangar on November 30th, the precise date determined when the MAX development schedule was defined more than four years ago. The airplane will now undergo pre-flight preparation before departing for Renton Field to continue flight test readiness. The airplane is is scheduled to make it’s first flight in early 2016.

“Today marks another in a long series of milestones that our team has achieved on time, per plan, together, With the rollout of the new 737 MAX – the first new airplane of Boeing’s second century – our team is upholding an incredible legacy while taking the 737 to the next level of performance.”

A frequent flyer for both work and pleasure - Vedant has held elite status on many of the major alliances and airlines. Also an avid aviation photographer, his pictures have been published in and on the covers of many international publications.
@TheVedic
Previous Chennai airport flooding: Expert warned authorities 7 years earlier
Next A320neo launch customer Lufthansa, not Qatar. IndiGo now third.