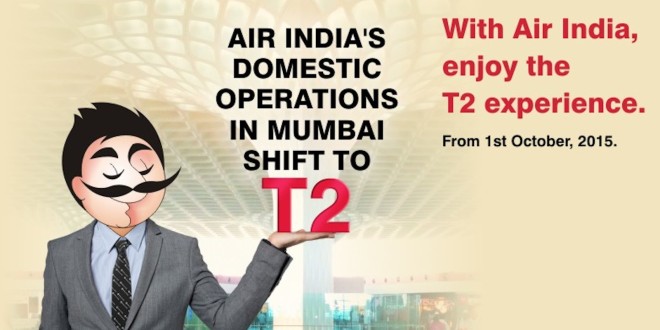 National carrier Air India will be the first airline to integrate its operations, domestic and international, at terminal 2 better known as T2, at Mumbai CSI airport.

The airline will be shifting its domestic operations from terminal 1A located just off the western express highway to the swanky new T2 located on the northern periphery of the airport. T2 has been envisaged as the integrated domestic and international terminal at Mumbai, similar to T3 at New Delhi IGI airport.

Air India will join the Tata-Singapore Airlines joint venture Vistara which is the only domestic airline operating at T2 at present.

The shift will benefit connecting passengers by saving the almost one hour it takes for the current inter-terminal transfers. On the flip side, T2 is further away for most city residents and takes more time to reach, especially from the southern parts of Mumbai some forms of public transport such as auto-rickshaws are prohibited from T2 and there are concerns that the amenities at the domestic side of T2 are not yet fully developed.

A electronics and automotive product management, marketing and branding expert, he was awarded a silver medal at the Lockheed Martin innovation competition 2010. He is ranked 6th on Mashable's list of aviation pros on Twitter and in addition to Bangalore Aviation, he has contributed to leading publications like Aviation Week, Conde Nast Traveller India, The Economic Times, and The Mint (a Wall Street Journal content partner). He remains a frequent flier and shares the good, the bad, and the ugly about the Indian aviation industry without fear or favour.
@BLRAviation
Previous GoAir shifts departure terminal at Mumbai, but arrivals remain same
Next Air India’s New Delhi San Francisco schedule ignores Bangalore