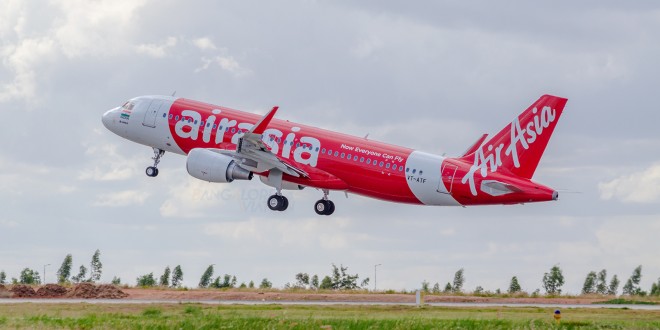 In March 2012, when AirAsia India was not even an idea, the long distance affiliate of its parent AirAsia, AirAsia X, withdrew from both New Delhi and Mumbai citing extremely high airport charges. Through the formation and application process of AirAsia India, group boss Tony Fernandes repeatedly claimed his Indian affiliate would not fly to New Delhi and Mumbai any time soon, due to the high costs.

Earlier this year, after almost a year in operation, and holding a mere one per cent of India’s air passenger market, AirAsia India did a dramatic U-turn from Fernandes’ stated strategy and commenced flights to New Delhi, India’s most expensive airport. Why? According to Mittu Chandilya, Chief Executive Officer of AirAsia India. the airline wanted improve is visibility and brand recall amongst the government policy makers and air passengers.

Speaking to the New York Times, Chandilya said “We realized that we need to be more visible, both to fliers and to policy makers,” “Flying to Delhi will simply give more people a chance to experience our product.”

In an effort to woo government officials, the airline flew them on a special flight over the Taj Mahal in Agra, prior to commencing services in New Delhi. The national capital is dotted with AirAsia India billboards to attract passengers and enhance brand recall.

Referring to the upcoming competition with India’s largest domestic and only consistently profitable airline, IndiGo, which is also New Delhi based, Chandilya said “When our first plane landed there, I made sure we could park it right between two of IndiGo’s planes,” “I wanted their passengers to see us. We’re taking on the big dog. We’re now inside IndiGo’s fort.”

In the article Chadilya slams the aviation policies of India saying “I believe in free markets and open skies, but if you look at the policies we have in place, I don’t think we have that at all.” We at Bangalore Aviation agree with him.

Taxes on aviation turbine fuel (ATF), at 28% in many states, are best described as insane. The route dispersal guidelines requiring airlines to fly to remote and tier III cities despite the unwillingness of the populace to pay even cut rate airfares, is stifling airlines. The 5/20 rule which prevents new Indian carriers to fly the lucrative international routes is highly regressive.

But these are matters of fact known before AirAsia India applied for an operating permit, and cannot be used either as justification and surely not an excuse.

There is no doubt on the aviation potential of India. Every major civil aviation organisation in the world including the two largest aircraft manufacturers, Airbus and Boeing, predict India to become the third largest air passenger market in the world within a decade. Our air passenger traffic must grow almost five times to cross the 300+ million passengers per year mark needed to achieve this ranking.

However, despite a declared policy of looking forward to the future, aviation has been completely ignored by the current government. Failing to recognise air travel as a critical enabler of the modern economy, governments, both central and states, still view air travel as a luxury and kill it with taxes, fees, and government owned oil company profits. The government keeps wasting its resources in trying to run the aviation sector instead making a comprehensive and coherent policy which enables and empowers the sector.

Living up to the hype

AirAsia India is nowhere close to the big talk and claims made by both Mr. Fernandes and Mr. Chandilya in the run-up to its commencing operations. Both these leaders appear to have badly under-estimated the challenges of the Indian civil aviation market. It pains us to see every stakeholder in Indian civil aviation, except the airlines and most of their vendors, making profits hands over fist. Yet, these two leaders cannot shift blame. They entered this perverted market eyes wide open, and more importantly mouths wide open. Now they need to make their airline live up to their hype.

A electronics and automotive product management, marketing and branding expert, he was awarded a silver medal at the Lockheed Martin innovation competition 2010. He is ranked 6th on Mashable's list of aviation pros on Twitter and in addition to Bangalore Aviation, he has contributed to leading publications like Aviation Week, Conde Nast Traveller India, The Economic Times, and The Mint (a Wall Street Journal content partner). He remains a frequent flier and shares the good, the bad, and the ugly about the Indian aviation industry without fear or favour.
@BLRAviation
Previous New voice info system at Bangalore airport in addition to WhatsApp service
Next Dennis Muilenburg is new Boeing CEO. McNerney remains Chairman.