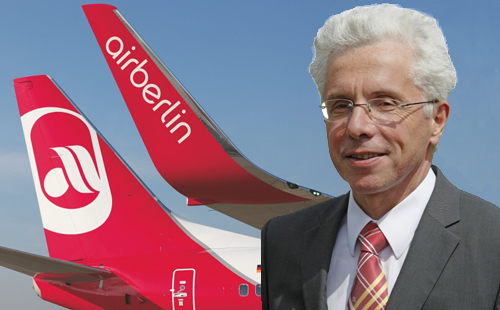 The Wadia owned low cost carrier GoAir has appointed Wolfgang Prock-Schauer as its Chief Executive Officer. Prock-Schauer has over 34 years of industry experience including one during the formative years of Jet Airways, India’s largest private airline.

GoAir lost its CEO Giorgio De Roni in March who resigned without citing any reasons. In his four year stint De Roni led a turn-around at the airline including making it GoAir the only profitable airline in India alongside domestic leader IndiGo. GoAir has also placed an order for 72 Airbus A320neo aircraft.

Prock-Schauer who recently resigned as the Chief Executive Officer of Air Berlin PLC and the end of March, has served as CEO of British Midland Limited (BMI) from October 2009 to 2012 and as the Chief Executive Officer of Jet Airways (India) Limited from June 2003 to October 15, 2009. He started his career with Austrian Airlines in 1981. He holds a Masters Degree in Economics and Business Administration from the University of Vienna.

Commenting on performance, Jeh Wadia the Managing Director of Go Air has stated “We are also pleased to inform that company has made significant increase in the operating revenue by 21% with EBITDA reporting a substantial improvement of 76% over the previous Financial Year. The Passenger Growth was 13.2% over last year, the Market Share went from 8.5% to 9.3% and the Load Factor from 74.3% to 79.2% for the Financial Year ended 31st March, 2015.” Yet, the airline has been in the news for reducing its schedule as it faces a rash of pilot resignations.

Securing the services of Prock-Schauer is a coup for the Wadia family. Along with a solid India experience, the Austrian brings in years of international network planning expertise and loads of industry contacts; all of which should serve GoAir well which is qualified to commence international operations and whose A320neo’s should start deliveries by 2018. The Wadias though, will have to stay clear of airline operations. Industry buzz has it that De Roni quit due to promoter interference. We earnestly hope Prock-Schauer is allowed to run GoAir with independence.