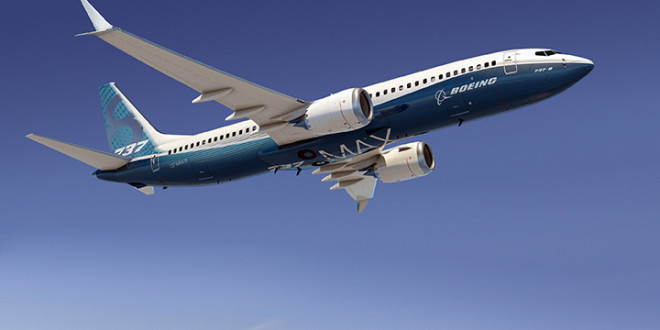 A computer rendering of the Boeing 737 MAX. Boeing Image.

Machine operators loaded 737 MAX wing skin panels and stringers into the new panel assembly line that uses automation to drill holes and install fasteners in the upper and lower wing panels. Mechanics also loaded the initial parts of the first 737 MAX spars – internal support structures in wings – into automated spar assembly machines. The unfinished skins, stringers and spars were machined by Boeing Fabrication Skin and Spar in Auburn and Fredrickson, Washington. When finished, the panels and spars will be transformed into completed wings.

“Employees in Renton are the best in the world at building single-aisle airplanes and now this world-class team is building the future with the first 737 MAX, Achieving this milestone on schedule is a testament to the success of the 737 and our integrated design and build team.”

The wings will be attached to the first 737 MAX fuselage on the new Central line in Renton Final Assembly later this year. The new production line will allow the team to isolate the first 737 MAX build from the rest of production in order to optimize the build process while the Renton factory continues to build at a rate of 42 airplanes a month.

A frequent flyer for both work and pleasure - Vedant has held elite status on many of the major alliances and airlines. Also an avid aviation photographer, his pictures have been published in and on the covers of many international publications.
@TheVedic
Previous Different yet similar: Network Strategies for Indian carriers
Next A day of revival at Malaysia Airlines and lessons for our national carrier