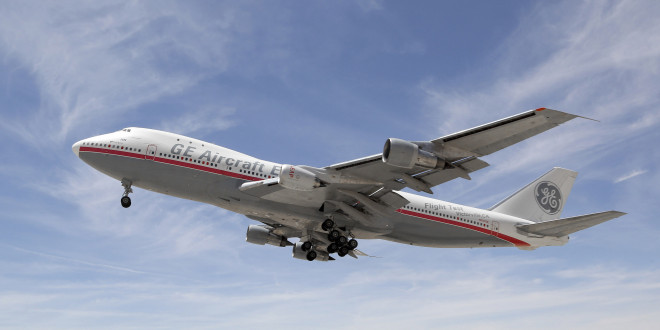 The First Flight of the LEAP-1B on a modified Boeing 747 testbed. Boeing Image.

Vedant Agarwal May 8, 2015 Boeing Comments Off on LEAP-1B for the Boeing 737 MAX begins flight test program

American airframer Boeing and engine manufacturer CFM International have successfully initiated flight testing of the LEAP-1B engine on a modified 747 flying testbed at GE Aviation Flight Test Operations in Victorville, California. The LEAP-1B engine is the exclusive powerplant for the Boeing 737 MAX family.

The testing is the next major milestone in a two-year program that will culminate in engine certification in 2016 and delivery of the first Boeing 737 MAX in 2017. The engine performed well and completed multiple aeromechanical test points at various altitudes during the five hour, 30 minute first flight.

Over the next several weeks, the flight test program will encompass a comprehensive test schedule that will gauge engine operability, stall margin, performance, emissions and acoustics. It also will further test the new age technologies incorporated in the engine, including the woven carbon fiber composite fan, the Twin-Annular, Pre-Mixing Swirler (TAPS) combustor, ceramic matrix composite shrouds in the high-pressure turbine and titanium aluminide blades in the low-pressure turbine

“I continue to be really impressed with the LEAP, These engines are demonstrating a maturity that you don’t always see in new products. I think our airline customers are going to be very pleased with this engine.”

A frequent flyer for both work and pleasure - Vedant has held elite status on many of the major alliances and airlines. Also an avid aviation photographer, his pictures have been published in and on the covers of many international publications.
@TheVedic
Previous India’s domestic air passenger traffic and airline performance for March 2015
Next Airbus A400M crashes near Seville Airport in Spain