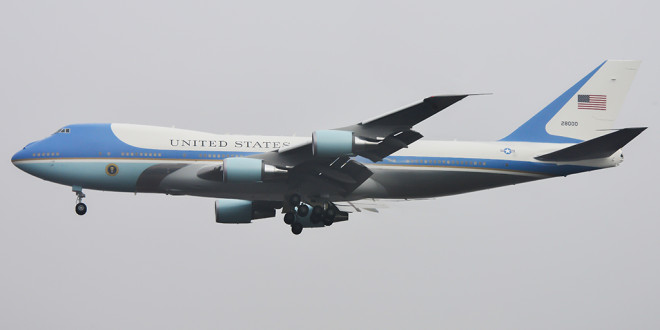 USAF chooses 747-8i platform for next Air Force One

Vedant Agarwal January 30, 2015 Military Comments Off on USAF chooses 747-8i platform for next Air Force One

The US Air force has announced that the Boeing 747-8i will serve as the next presidential aircraft, commonly known as Air Force One.

The decision, made official through a Determinations and Findings document, authorizes the commercial aircraft purchase by other than full and open competition. The Air Force intends to purchase three numbers of the aircraft platform as well as the modifications necessary to missionize the aircraft, but has not yet signed a formal contract with Boeing.

The current VC-25 (Boeing 747-200) presidential aircraft are reaching the end of their 30 year life cycle and according to The Wall Street Journal, the U.S. Air Force has set aside $1.65 billion between 2015 and 2019 for two replacement jets.

“The Boeing 747-8 is the only aircraft manufactured in the United States (that), when fully missionized, meets the necessary capabilities established to execute the presidential support mission, while reflecting the office of the president of the United States of America consistent with the national public interest.

The current fleet of VC-25 presidential aircraft has performed exceptionally well, a testament to the Airmen who support, maintain and fly the aircraft, Yet, it is time to upgrade. Parts obsolescence, diminishing manufacturing sources and increased down times for maintenance are existing challenges that will increase until a new aircraft is fielded.”

A frequent flyer for both work and pleasure - Vedant has held elite status on many of the major alliances and airlines. Also an avid aviation photographer, his pictures have been published in and on the covers of many international publications.
@TheVedic
Previous TigerAir terminates SpiceJet agreement due to latter’s network changes
Next EU regulator warns airlines not to fly low in Pakistan airspace due to terror threat