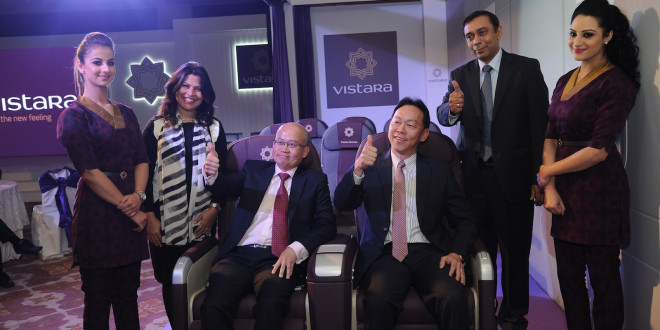 The much anticipated launch of Vistara, the airline promoted by the Tata and Singapore Airlines joint venture in is the process of commencing its first flight today. It will be the third full service carrier in India after Jet Airways and Air India. Ironically both these airlines have a connection to the Tatas in the past. Jet is widely suspected of using its political clout to ensure the plans of the Tatas and Singapore Airlines to float an airline in the early 1990’s did not fructify, and Air India was once owned by the Tatas before the Nehru government nationalised it in 1953, and the Morarji Desai government booted out the airline’s founder JRD Tata as Chairman in 1978.

Vistara flight UK890 from New Delhi to Mumbai is in the process of check-in and is scheduled to depart at 12:30 today, a little over one hour from now. The airline is promising a seamless and personalised travel experience and our team member Vedant is on the inaugural flight to bring you a full report.

Vistara will rely on partner Singapore Airlines, world renowned for its service experience, to manage the airline. One can expect Vistara to learn from the Singaporeans the art of addressing their premium passengers by their name, courtesy of a seat print-out with passenger names placed at the bottom of the tray the crew would carry.

A electronics and automotive product management, marketing and branding expert, he was awarded a silver medal at the Lockheed Martin innovation competition 2010. He is ranked 6th on Mashable's list of aviation pros on Twitter and in addition to Bangalore Aviation, he has contributed to leading publications like Aviation Week, Conde Nast Traveller India, The Economic Times, and The Mint (a Wall Street Journal content partner). He remains a frequent flier and shares the good, the bad, and the ugly about the Indian aviation industry without fear or favour.
@BLRAviation
Previous Inflight review: Etihad Business Class: Airbus A340-600: Bangalore-Mumbai-Abu Dhabi
Next Tata SIA Vistara inaugural flight – first pictures