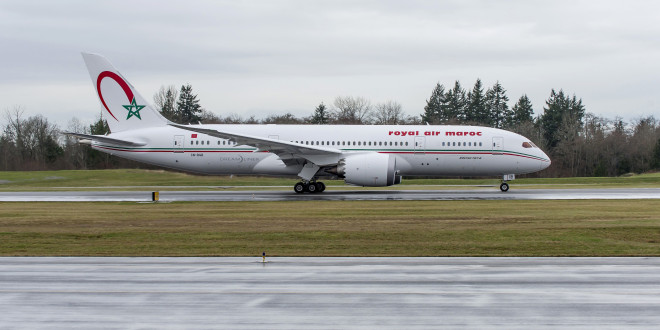 American air-framer Boeing has delivered Moroccan flag carrier Royal Air Maroc’s first 787 Dreamliner. The airline will be the first carrier in the Mediterranean region to operate the 787.

The airplane bearing the registration CN-RGB is powered by two General Electric GEnx-1B engines, was delivered to the airline on Dec. 31, 2014 from Boeing’s Everett Delivery Center. The aircraft then flew a 4,788 nautical mile (8,867 kilometer) nonstop flight to Royal Air Maroc’s home base in Casablanca at Mohammed V International Airport.

“The 787 will provide Royal Air Maroc the capability to grow its long haul network and significantly reduce operating costs, all while offering its customers an unmatched on-board experience, Royal Air Maroc is a valued Boeing customer, and we are delighted to be able to celebrate with the airline as it opens a new chapter in its long and successful history with the operation of the 787. We look forward to strengthening our partnership with Royal Air Maroc as it expands its global long haul fleet.”