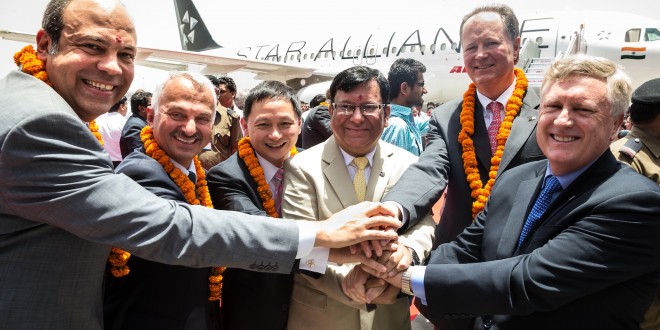 In a smart move that should benefit the national carrier, the Government has extended the tenure of Air India’s Chairman and Managing Director, Mr. Rohit Nandan up to August 2015.

As per an order issued by the Department of Personnel and Training (DoPT), the Appointments Committee of the Cabinet approved the extension “till August 21, 2015 or till the appointment of a regular incumbent, whichever is earlier”

For Nandan who oversaw the airline’s inductance in to the world’s largest grouping of airlines, the Star Alliance, this is the second extension in three months. Earlier the government wanted another face the helm of affairs prompting the alliance to write to the government requesting Nandan’s continuity at the helm of Air India’s affairs.

If one has to consider conspiracy theories, Nandan was the target of the airline’s employees’ unions, many of whom are politically affiliated to the Shiv Sena. The alliance between the ruling BJP and the Sena broke down ahead of the elections of Maharashtra state of which Mumbai is the capital. Is this a political “in your face”?

Who knows, but what we can say is that we are glad it has happened. Air India needs some stability and continuity at the top.

A electronics and automotive product management, marketing and branding expert, he was awarded a silver medal at the Lockheed Martin innovation competition 2010. He is ranked 6th on Mashable's list of aviation pros on Twitter and in addition to Bangalore Aviation, he has contributed to leading publications like Aviation Week, Conde Nast Traveller India, The Economic Times, and The Mint (a Wall Street Journal content partner). He remains a frequent flier and shares the good, the bad, and the ugly about the Indian aviation industry without fear or favour.
@BLRAviation
Previous Boeing begins to manufacture the first parts for the 737 MAX
Next Exclusive photos: Air India Boeing 787-8 Dreamliner VT-ANI being retro-fitted for reliabilty