Continuing our analysis in to national carrier Air India’s international operations which loses money on all but two flights, yesterday we published part 1 of the three part analysis which focussed on the numbers, today’s analysis comes from Bangalore Aviation guest analyst and former co-author Vinay Bhaskara. Vinay’s strength is finance, and he focusses on the costs of Air India. Fuel costs in India are already bordering on the lunatic, but Air India seems to have non-fuel costs higher than most western carriers. This is alarming since Air India does not have access to high yield routes like Europe to North America or Japan to the Americas to cover the higher costs. As a result, by its own internal calculations, Air India lost Rs 4,273.35 crores (approximately $712 million at current exchange rates) on its international network alone.

Air India’s international operations are operating at a massive loss, -31.6% operating margin to be exact, with Cost per Available Seat Kilometer (C/ASK) of Rs 4.18 versus Revenue per ASK (R/ASK) of just Rs 2.86. Even by the lesser standards of state-owned airlines, both figures are absolutely abysmal. A CASK of Rs 4.18 works out to roughly 7.0 US cents. By comparison, there are US carriers (most notably ultra-low cost carrier [ULCC] Spirit Airlines) who have international C/ASK of as low as 6.0 cents. Air India certainly has revenue challenges, but its number one challenge for international operations is expenses. Operating in India, with lower salary standards than the US or western Europe, Air India should have a massive cost advantage on overhead, but its bloated and overpaid workforce generates a cost problem.

Fuel costs are interesting for Air India, and mainly reflect the insanity of massive differences in aviation turbine fuel (ATF) taxes across myriad Indian states. Average fuel cost per ASK for Air India’s international network is Rs 1.80, but there is wide variance therein based on the different ATF taxation by state. For example, while the efficient Boeing 787-8 Dreamliner does offer more fuel efficiency than some of Air India’s other aircraft, there are narrow-body routes from Hyderabad and Chennai, both of which boast lower ATF taxation, that have a lower fuel cost per ASK than the Boeing 787-8, one of the most fuel efficient aircraft in the history of aviation, which operate from Mumbai and New Delhi. That is incredible and more evidence than ever that India’s fuel taxation system must be reformed.

Indeed ATF taxation played a massive role in Air India’s losses. 57 of 59 routes couldn’t cover total costs and 31 of 59 couldn’t even cover basic cash operating costs. But if you remove the 17% average ATF tax which I had calculated for 2012-13, only 16 routes fail to cover the cash costs and 54 of 59 still reach a net loss. But the overall operating margin improves to -24.2% – still abysmal but far superior to the number today. 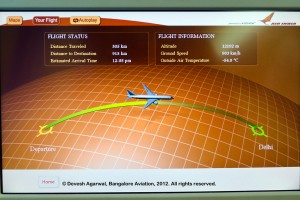 While costs are Air India’s number one problem, revenue performance is not substantially better. The long haul route network is a devastatingly poor performer, with cumulative losses of Rs 258.8 Crore ($42.5 million) across 14 routes to East Asia, Europe, and North America. The three US routes alone have a cumulative loss of Rs 107.5 Crore.

The US routes are not the only offenders. Only the Sydney-Melbourne triangular route and Birmingham can be excused for poor performance as recently launched routes that require a spool-up process.

The rest of Air India’s long haul services have been in place for several years, and the performance on the other European and East Asian routes is horrifying. Many of these routes have been taken over by Boeing 787 Dreamliners, which have better operating economics than the 777-200LRs they largely replaced. Admittedly, Air India’s 787s are the so-called “Terrible Teens” that are the worst performing of the Dreamliners Boeing has delivered. They are are overweight and fail to deliver on promises for fuel and maintenance expense savings. But even still, if the cash performance on the Dreamliner routes is so poor, one can only imagine how much worse they were with 777s.

Conversely, Air India’s Middle Eastern network is a comparatively better performer, in particular flights to Dubai and Riyadh, which have massive origin and destination (O&D) traffic to Indian destinations. The Delhi and Mumbai hubs are losing buckets of money, but at least they make some (relative) sense in terms of contributing to the network and providing connectivity for domestic flights. Operating fully 23 international flights that don’t touch either Delhi or Mumbai, and lose money is asinine. Air India could cancel these routes, save more than Rs 60 crores, sell off the A320 family aircraft that operate these routes, and use the proceeds to pare down its massive debt.