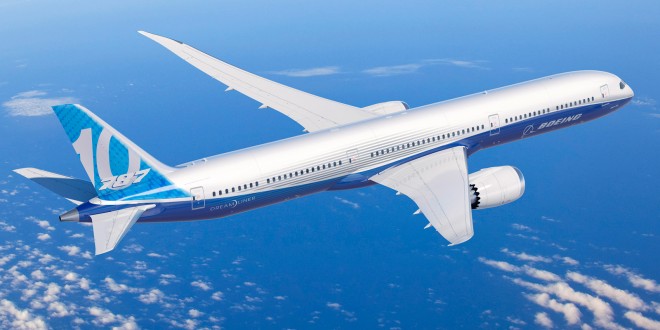 US airframer Boeing which announced the largest member of its new 787 Dreamliner family, the 787-10, has decided to exclusively assemble the new aircraft in its North Charleston, South Carolina facility.

The 787-10 would be used on high demand routes of up to 10 hours making it ideal for trans-Atlantic flights and long regional flights. India to Europe, Middle-East to Europe, Far East, and South-East Asia to Australasia, Northern Asia, etc.

Boeing will continue to assemble both the shorter variants of the Dreamliner family the 787-8s and 787-9s in Everett, Washington, and North Charleston plants. Boeing expect to commence final assembly of its first 787-10 in 2017.

The longer mid-body section of the 787-10 is too big to be transported from North Charleston where all Dreamliner systems integration work is performed. With the Dreamliner program running about three years behind schedule, there is tremendous pressure on Boeing to improve productivity on its existing 787 production lines to catch-up with the back-log. Boeing produces ten Dreamliners per month, seven in Everett and three in North Charleston. Boeing plans to increase the production at North Charleston to five in 2016 and seven by 2020.

A electronics and automotive product management, marketing and branding expert, he was awarded a silver medal at the Lockheed Martin innovation competition 2010. He is ranked 6th on Mashable's list of aviation pros on Twitter and in addition to Bangalore Aviation, he has contributed to leading publications like Aviation Week, Conde Nast Traveller India, The Economic Times, and The Mint (a Wall Street Journal content partner). He remains a frequent flier and shares the good, the bad, and the ugly about the Indian aviation industry without fear or favour.
@BLRAviation
Previous Special 10th anniversary livery for new Nok Air 737
Next TigerAir offers exclusive special fares on Cleartip as part of partnership