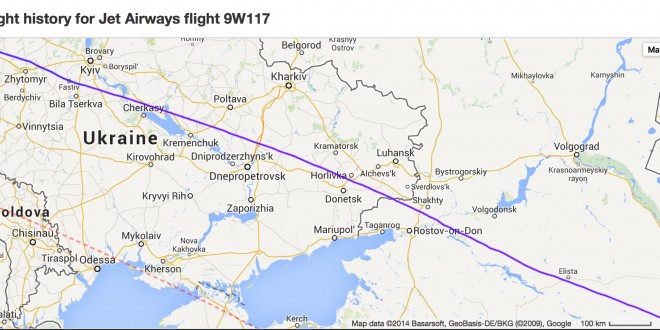 Around 3pm in the afternoon of July 18th, a day after the crash of Malaysia Airlines flight MH17 from Amsterdam to Kuala Lumpur, India’s largest private airline, Jet Airways, issued a statement assuring the public that the airline did not fly over the Ukraine “since the conflict began” which one would assume was from a few months ago when separatists commenced seceding Crimea from the Ukraine.

However, data from flight tracking sites like FlightAware, PlaneFinder, and FlightRadar24 show this statement to be completely false.

Radar tracking data shows that Jet Airways flight 9W119 which departed from London at 08:39am on July 17 for Mumbai flew almost the same air-corridor north-east of Donetsk over the village of Shakhtars’k, the crash site of MH17, just about two hours before the ill-fated airliner was blown out of the sky.

Other radar tracks show that Jet Airways, like many other airlines, used to regularly over-fly Ukrainian airspace in the vicinity of the crash site till the crash.

Night of 17-July hours after the crash, re-routing to avoid Ukraine

We wrote to the airline seeking clarification, however no response was received till the time of publication of this story. We will be happy to publish any response from the airline should it be backed up by flight track data.

To most plane spotters who are regular visitors at Bangalore Aviation, ADS-B (Automatic Dependent Surveillance – Broadcast) is a known commodity.

ADS-B is a system in which the electronic equipment on-board an aircraft determines its position via the Global Positioning System (GPS) satellites and then broadcasts the aircraft’s identity, location, altitude, speed, etc., via a digital radio link signal at 1,090MHz, every half a second. Dedicated ADS-B receivers on the ground pick-up these signal and relay them to air traffic control and central servers of flight tracking sites like those mentioned earlier.

ADS-B is not dependent on radar to show the aircraft’s position and altitude.

Automatic – Requires no pilot input or external interrogation (like from secondary radar systems).
Dependant – Depends on accurate GPS position and velocity data from the aircraft’s navigation system.
Surveillance – Provides aircraft position, altitude, velocity, and other surveillance data.
Broadcast – Information is continually broadcast for monitoring by ADS-B receivers on the ground or other aircraft.

No need to lie

No one is faulting Jet Airways’ flights over the Ukraine. Almost every airline which flies between Europe and south / south-east Asia did it till the MH17 shoot-down. The air traffic control authorities like Eurocontrol, and global civil aviation authorities like ICAO permitted overflights. The issue at hand is the blatantly false statement.

One fails to understand the need for Jet Airways to put out such a blatantly wrong statement. Yesterday, in a Firstpost report, Ivor Soans debunked the claims by the ministry of civil aviation about Air India flight AI-113 from New Delhi to Birmingham not being in the vicinity of the shoot-down of MH17. In business, as in life, credibility is important, and this is built with consistent integrity and unflinching accuracy.

Is distorting the truth become so compulsive to Indian carriers that it is now second nature for these organisations and the people serving in them? Or do Indian civil aviation stake-holders assume their customers are idiots?

The Indian aviation industry seem to shoot itself in the foot with amazing regularity, destroying what limited credibility they do have. Is there any reason to doubt why almost no one accepts “statements” put out by these airlines and authorities?