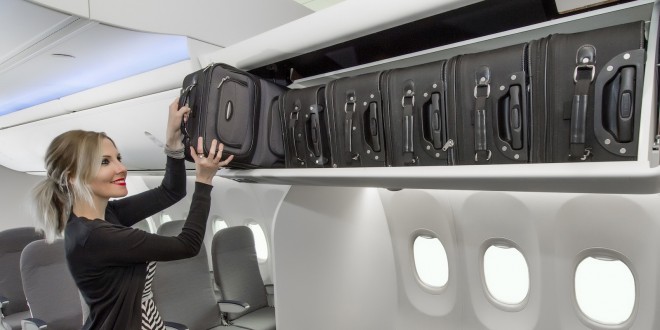 Boeing to increase 737 cabin baggage capacity by 50% next year

Devesh Agarwal July 30, 2014 Boeing Comments Off on Boeing to increase 737 cabin baggage capacity by 50% next year

US airframer Boeing which manufactures the world’s most popular aircraft the 737, will increase the cabin’s baggage storage capacity by over 50% from late next year.

With airlines introducing check-in baggage charges, passengers carrying bags in to cabin have shot up, and the space to store them has become a sore point.

Seattle based Alaska Airlines will be the first airline to launch the new bins in late 2015.

A electronics and automotive product management, marketing and branding expert, he was awarded a silver medal at the Lockheed Martin innovation competition 2010. He is ranked 6th on Mashable's list of aviation pros on Twitter and in addition to Bangalore Aviation, he has contributed to leading publications like Aviation Week, Conde Nast Traveller India, The Economic Times, and The Mint (a Wall Street Journal content partner). He remains a frequent flier and shares the good, the bad, and the ugly about the Indian aviation industry without fear or favour.
@BLRAviation
Previous Video discussion: The recent spate of airline accidents. A cause for worry? #MH17
Next Special 10th anniversary livery for new Nok Air 737