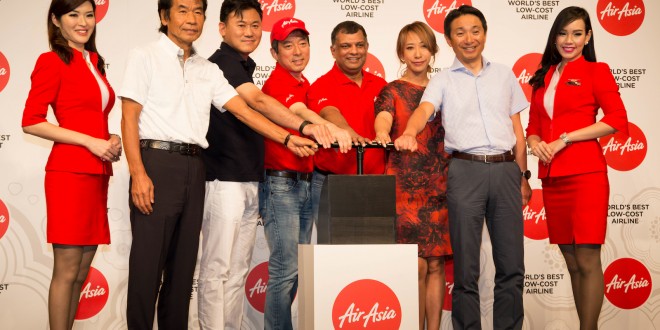 Tentatively, the company will have a capital of seven billion yen or about $69 million at today’s exchange rates, and its CEO will be Yoshinori Odagiri. The share-holding pattern will see AirAsia holding 49% stake, Octave 19%, Rakuten 18%, Noevir 9% and Alpen 5%. Octave is a custom financial vehicle just created to acquire, own, manage, hold, sell, and dispose of the shares of AirAsia Japan and make collections from the shares of AirAsia Japan. Rakuten is a 17 year old Japanese company with major businesses including internet e-commerce and travel, bank, credit card, securities, etc. in the financial services domain, telecommunications and professional sports. Noevir is a three year old Japanese company focussed on cosmetics, pharmaceuticals, health food, apparel and aviation. Alpen is the oldest of the companies, 42 years old, its major business includes manufacturing and retail of variety of sporting goods equipment for ski, golf, tennis, marine sports, baseball, and leisure goods. The company also manages various ski resorts, golf courses and fitness clubs.

A electronics and automotive product management, marketing and branding expert, he was awarded a silver medal at the Lockheed Martin innovation competition 2010. He is ranked 6th on Mashable's list of aviation pros on Twitter and in addition to Bangalore Aviation, he has contributed to leading publications like Aviation Week, Conde Nast Traveller India, The Economic Times, and The Mint (a Wall Street Journal content partner). He remains a frequent flier and shares the good, the bad, and the ugly about the Indian aviation industry without fear or favour.
@BLRAviation
Previous Etihad takes delivery of it’s 100th and 101st aircraft
Next SpiceJet adds flights in Hyderabad, New Delhi, Coimbatore and Bangalore