The Descent of Air India a book authored by Jitender Bhargava, former Executive Director of the national carrier, details the downfall of one of India’s most iconic brands. 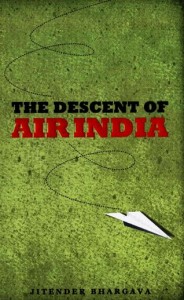 Air India which was once regarded as one of the world’s premier airlines, has been allowed to fall into disrepair and ruin due to a variety of factors, but most in the industry attribute the carrier’s steep and calamitous fall to excessive political interference coupled with a weak management. The book explains how Air India’s reputation has been ground to dust which now stands on the brink of financial ruin. It looks at how politicisation and apathy destroyed the work ethic; examines the decisions that led to the airline’s downfall to the point of financial disaster; and brings out how those who were entrusted with the care of Air India, let it down.

In the book, Mr. Bhargava suggests the former civil aviation minister Mr. Praful Patel, during whose tenure many questionable decisions were made, and were indicted by the Comptroller and Auditor General of India, was a key player in the downfall of the airline. Patel filed a defamation suit against the book in January this year which pressured the publisher Bloomsbury, to withdraw all copies, and apologise to him via an advertisement in a national newspaper.

As with any banned/withdrawn item, there was a surge in interest for the book. Bhargava has now produced the withdrawn book in an Amazon Kindle e-book format which can be purchased for Rs. 299 from Amazon.

Many Bangalore Aviation readers, especially those from outside India, ask why is Air India this way? To them we recommend this book. Find out how it happened? Why it happened? What are the inherent weaknesses? Could Air India’s marginalisation been prevented? Who are responsible? While the book will give you many answers, we find that the solutions are not so easy to find, and even more difficult to implement.

Bhargava also says an updated version of the print edition will be out in July 2014.