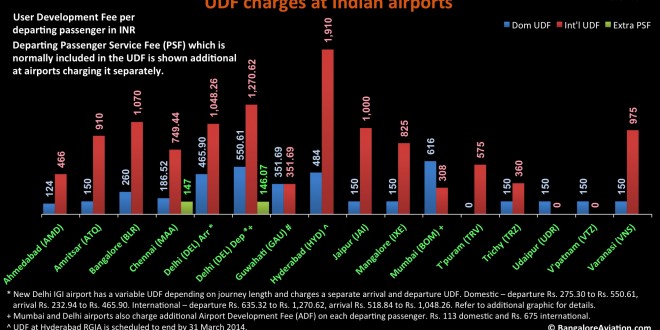 New Delhi airport is the most expensive in India with separate UDFs charged on arrivals and departures which are variable based on the great circle distance of the origin or destination city. In addition a development fee, and a passenger service fee is also charged. If you would like to work out the distances, Air India has produced two nice PDFs with most world cities which are categorised on their distances from New Delhi. Download the domestic cities distance PDF here, and the international one here.

With the inauguration of the new T2 in Mumbai, travellers at the economic capital can expect to pay airport fees similar to New Delhi.

In case you would like to decode the taxes on your ticket. UDF is shown as IN, ADF/DF is shown as YM, and PSF is shown as WO. At most airports across India, PSF is normally included in the UDF amount.

Your comments and feedback are always welcome as usual.