In a bizarre incident earlier this morning around 09:30, a private Cessna 172 plane VT-EUC was forced to make an emergency landing on National Highway 69 (NH-69) near Betul in Madhya Pradesh, due to strong winds.

Industrialist Sam Verma of Michigan Tyres Ltd., was unable to land at his factory’s private airstrip, next to the highway, due to extremely high winds. His staff alerted the local police who cleared the highway allowing the enthusiast pilot to land. According to media reports, there was no damage to property.

After the landing, however, there was some drama. NDTV reports

“Mr Verma alleged that construction of pillars near his factory by the highway authorities caused the diversion. He has left his plane on the four-lane highway in protest. He said he wanted to meet the National Highway Authority of India officials first before removing his plane,”

“Conspiracy theories have started doing the rounds as to why was the aircraft not landed on the airstrip which was in close vicinity. Locals are alleging that the industrialist owner has had some problems with the National Highway authorities”

A electronics and automotive product management, marketing and branding expert, he was awarded a silver medal at the Lockheed Martin innovation competition 2010. He is ranked 6th on Mashable's list of aviation pros on Twitter and in addition to Bangalore Aviation, he has contributed to leading publications like Aviation Week, Conde Nast Traveller India, The Economic Times, and The Mint (a Wall Street Journal content partner). He remains a frequent flier and shares the good, the bad, and the ugly about the Indian aviation industry without fear or favour.
@BLRAviation
Previous Video: Etihad to fly to Dallas-Fort Worth
Next Delhi airport duty free launches Dewar’s Legacy Collection 1893 whisky 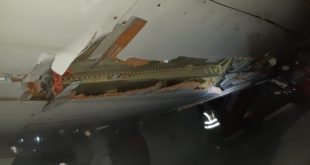