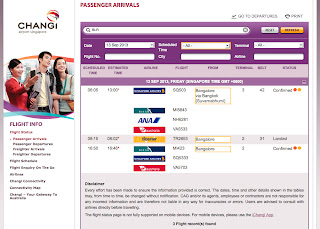 Its Friday, the 13th, and many a frequent flyer will sympathise with the bad-luck of the passengers on Singapore Airlines flight SQ503 from Bangalore to Singapore earlier this morning.

The inbound flight SQ502 from Singapore scheduled to arrive at Bangalore around 10pm, was diverted to Chennai due to the runway closure at Bengaluru International Airport following the accident of IndiGo airline flight 6E-125 around 8pm last night.

The in-bound passengers waited and finally the runway at Bangalore was opened around 11pm. SQ502 finally arrived in Bangalore around 2am early this morning.

The return flight SQ503, left around 3am, about four hours behind schedule. The crew realised that they would exceed their Flight Duty Time Limit (FDTL). Hurried parleys were made with headquarters, and a decision was taken to divert to Bangkok. In the mean time, a stand-by crew was flown from Singapore to Bangkok to crew SQ503 back to Singapore.

The aircraft was on the ground in Bangkok for less than a hour, and SQ503 finally arrived in Singapore at 1pm, seven hours behind schedule.

All I can do is shake my head and sympathise with the passengers, but at the same time, give credit to the crew for thinking up of a solution.

If they had continued even to Kuala Lumpur, they would be in breach of the regulations.

Had they stayed back in Bangalore, the earliest a replacement crew could come would be on the morning SilkAir flight. This would mean the SQ503 flight would reach Singapore only around 5:30pm, and connections to the US west coast would be missed.

Already the existing delay meant that the morning connections to the United States, Asia, and Australia were missed. The Bangkok diversion allow the airline to try and make up some of the connections in the evening. However, considering this is the weekend, the airline staff in Singapore has their work cut out for them.

A electronics and automotive product management, marketing and branding expert, he was awarded a silver medal at the Lockheed Martin innovation competition 2010. He is ranked 6th on Mashable's list of aviation pros on Twitter and in addition to Bangalore Aviation, he has contributed to leading publications like Aviation Week, Conde Nast Traveller India, The Economic Times, and The Mint (a Wall Street Journal content partner). He remains a frequent flier and shares the good, the bad, and the ugly about the Indian aviation industry without fear or favour.
@BLRAviation
Previous Interesting trivia: It takes 96 people to fly an airline passenger
Next JAL to Introduce Original Aroma at Its Lounges in Japan