An AED is a portable device which is attached via paddles to a patient suffering signs of a sudden cardiac arrest (SCA) or myocardial infarction (a heart attack). The AED will automatically confirm the diagnosis, and if the person is indeed suffering a heart attack, will give the needed electrical jolt to stabilise the heart-beat and help save the life with the press of a button. The AEDs can be used by anyone without formal training—each AED comes with audio and visual instructions for its operation.

With more than 660,000 deaths occurring every year in India alone as a result of SCA, the survival rate is less than one per cent as emergency medical services do not reach on time. This actually means that this is the leading cause of death and accounts for greater than 50 per cent of cardiovascular deaths in India. An AED, if used during an SCA within the first four to six minutes, can save more than 95 per cent of lives, stated the release.

“The instances of deaths due to SCA have been on the rise. Long working hours, hectic lifestyle and unhealthy eating habits are the main causes behind rising incidences of SCA”, “Unfortunately, an SCA does not happen only to people who suffer from heart diseases or with age or only to men. SCAs are unrelated to age, sex, existing heart ailments and family history. Recently we have seen increased incidences of deaths due to SCA in women and children,”

“An AED and Cardio Pulmonary Resuscitation (CPR) combined can save lives to a large extent but their availability in public places in India has still not happened. We have seen an increase in AEDs in aircraft and at airports where it is mandatory but an AED is still not mandatory in metros, malls, cinema halls or even ambulances.”

A electronics and automotive product management, marketing and branding expert, he was awarded a silver medal at the Lockheed Martin innovation competition 2010. He is ranked 6th on Mashable's list of aviation pros on Twitter and in addition to Bangalore Aviation, he has contributed to leading publications like Aviation Week, Conde Nast Traveller India, The Economic Times, and The Mint (a Wall Street Journal content partner). He remains a frequent flier and shares the good, the bad, and the ugly about the Indian aviation industry without fear or favour.
@BLRAviation
Previous Air India and State Bank of India launch co branded credit cards
Next Delta receives first next generation Boeing 737-900ER 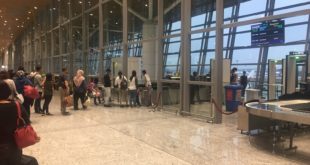