Ryanair was the best performing airline at Bristol having achieved a 100% record for correct departure routes on take-offs, minimising the noise disturbance on local residents, while Ryanair was placed first for Continuous Descent Approaches (CDA), a landing procedure which also minimises noise disturbance and reduces emissions.

To celebrate, Ryanair is releasing 100,000 seats across its entire European network at prices starting from just £19.99 for travel on Mon, Tue, Wed & Thur in October and November and these “all in” low fares will be available on over 1,000 of Ryanair’s European routes, including from Bristol to Dublin, Milan or Venice Treviso, but must be booked on www.ryanair.com before midnight (24:00hrs) Thur, 22 August.

“Carrying over 81.5m passengers this year, Ryanair knows all about being number one in Europe, with the lowest fares, no fuel charges guaranteed, the most on-time flights, the fewest cancellations and the least mishandled bags, and we are delighted to have been recognised in Bristol Airport’s inaugural Tracker Awards for our outstanding flight performance. Passengers at Bristol Airport can be a winner themselves by choosing one of our 31 low-fare routes to and from Bristol.

To celebrate our award, Ryanair is releasing 100,000 seats on over 1,000 European routes, including Bristol to Dublin, Milan or Venice, at prices starting from just £19.99, for travel in October and November. These seats are only available until midnight (24:00hrs) Thursday (22 Aug) and at these mad prices are sure to be snapped up fast, so we urge passengers to book them on www.ryanair.com before they sell out.” 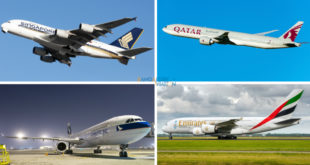