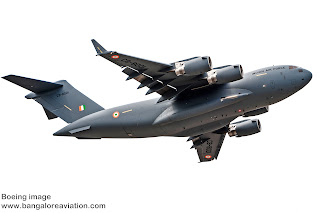 India’s first Boeing C-17 Globemaster III transport airlift aircraft, CB-8001, is en-route to India after completing its almost six month long flight test program at Edwards Air Force Base in Palmdale, California, USA, which began following the aircraft’s delivery to the Indian Air Force (IAF) on January 22. Boeing is expected to deliver four more C-17s to the IAF this year and the balance five in 2014.

Curiously, while the C-17 a global distance airlifter, the delivery flight which took off Tuesday night India time, will stop at many places along the way and arrive at its base, Air Force Station, Hindon, outside the capital New Delhi only on Monday June 17th.

The arrival of the first C-17 is almost two years to the date, after the original $4+ billion procurement deal for 10 aircraft was signed in June 2011. With the 10 aircraft, the Indian Air Force will be the largest operator in the world after the US Air Force. Boeing has delivered 254 C-17s, including 222 to the U.S. Air Force and a total of 32 C-17s to Australia, Canada, India, Qatar, the United Arab Emirates, the United Kingdom and the 12-member Strategic Airlift Capability initiative of NATO and Partnership for Peace nations.

India is expected to sign a follow-on order for more C-17’s shortly.