GoAir replaces Kingfisher Airlines at Terminal 1A at Mumbai

Devesh Agarwal June 27, 2013 Uncategorized Comments Off on GoAir replaces Kingfisher Airlines at Terminal 1A at Mumbai

From July 1, 2013, Wadia group promoted GoAir will be moving its operations at Mumbai’s Chhatrapati Shivaji International Airport, from Terminal 1B (the private airlines’ terminal) to Terminal 1A (Air India / Indian Airlines terminal). GoAir will occupy some of the space that has been vacated by the cessation of operations of Vijay Mallya promoted Kingfisher Airlines.

GoAir currently operates 360 movements per week from Mumbai. A dedicated aisle of check-in counters at terminal 1A shall now be available for GoAir passengers. The airline will be also moving its ticketing office to the new premise.

The traffic at Terminal 1B has congested for some time thanks to the diversion of passengers from the implosion of Kingfisher, and the growth of domestic passenger traffic at the commercial capital of India. It would have been better if one of the larger incumbents like IndiGo or SpiceJet would have shifted, when compared to a smaller operator like GoAir which operates about 360 weekly movements i.e. about 26 departures per day.

When queried, persons with knowledge of developments but who preferred to remain anonymous, told Bangalore Aviation that this move has been planned for a long time, and all airlines were given the offer to shift operations. Only GoAir opted for the shift. We can surmize, that GoAir faced the least disruption to their operations since they are a purely domestic airline at present, and the others would find it more convenient to remain in Terminal 1B which is closer to the international terminal T2.

A electronics and automotive product management, marketing and branding expert, he was awarded a silver medal at the Lockheed Martin innovation competition 2010. He is ranked 6th on Mashable's list of aviation pros on Twitter and in addition to Bangalore Aviation, he has contributed to leading publications like Aviation Week, Conde Nast Traveller India, The Economic Times, and The Mint (a Wall Street Journal content partner). He remains a frequent flier and shares the good, the bad, and the ugly about the Indian aviation industry without fear or favour.
@BLRAviation
Previous Delta CEO Anderson gives up seat for mother of diabetic daughter
Next British Airways’ first 787 Dreamliner arrives in London 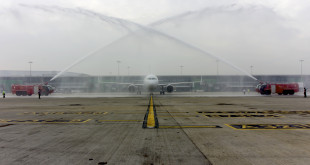 Airlines hogging bilateral rights as a means to delay competition