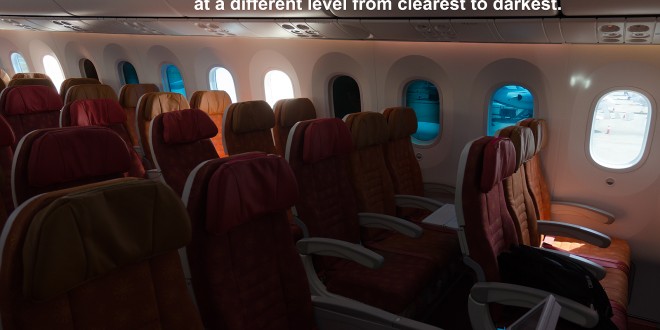 Electronic window dimming on the 787 Dreamliner.

As its much vaunted state of the art jetliner, the 787 Dreamliner returns to the skies, US airframer Boeing faces a dilemma. On the one hand Boeing has incorporated many improvements in the composite fuselage aircraft, which was meant to improve passenger comfort.

Yet, despite all these improvements, with the exception of the two Japanese airlines All Nippon and Japan Airlines, all the other 787 operators have opted for the ultra-tight nine abreast 3-3-3 configuration in economy class that leaves the seats around a bone crushing 17″ width. Fine for a short 737 flight, but extremely uncomfortable for the longer eight to twelve hour flights envisaged in the Dreamliner.

Even British Airways which recently revealed its 787 cabin layout has chosen the narrow 3-3-3 configuration for its World Traveller (economy) class.

One has to wait and see what configuration will “premium” carriers like Singapore Airlines choose.

So unless you are a zero sized petite Bollywood, Hollywood model, you might be well advised to leave the Dreamliner in your dreams. On the flip side, since most airlines have chosen not to have a first class in their 787s, if you have the big bucks or frequent flier miles to afford the Business Class, then the Dreamliner will truly live up to its name in its pampering.

Talking about frequent flier miles, I have just returned from one trip covering the US and Europe and had a chance to experience the new business class aboard Lufthansa’s 747-8i’s and the BusinessFirst “Pods” aboard Air Canada’s 777s and 767s. They were both good experiences and I request you to please await my trip reports.

Unfortunately, I am going back to the US. Will be in the air when this publishes. While I am a charter member of Masochists-R-Us, but, after a long long time, I am flying Singapore Airlines, in their 777 economy class, considered the best in the world. Stay tuned for that trip report too.

A electronics and automotive product management, marketing and branding expert, he was awarded a silver medal at the Lockheed Martin innovation competition 2010. He is ranked 6th on Mashable's list of aviation pros on Twitter and in addition to Bangalore Aviation, he has contributed to leading publications like Aviation Week, Conde Nast Traveller India, The Economic Times, and The Mint (a Wall Street Journal content partner). He remains a frequent flier and shares the good, the bad, and the ugly about the Indian aviation industry without fear or favour.
@BLRAviation
Previous Opinion: Jetihad deal means India’s international market belongs to the MEB3
Next Infographic: Etihad fleet compared to Formula 1