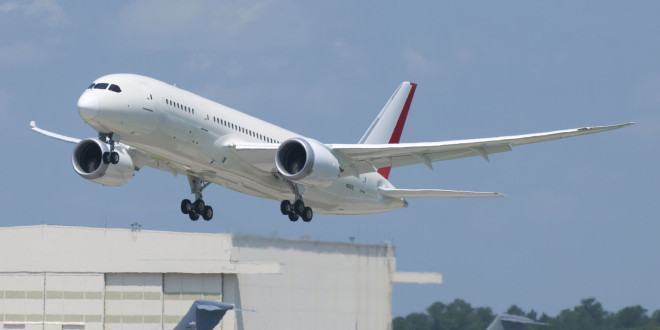 The first Boeing 787 Dreamliner built at their new South Carolina facility, completed its first flight yesterday, even as its destined customer, national carrier, Air India, delayed taking delivery of its first 787 thanks to the on-going strike by its international pilots.

Aircraft number 46, which is expected to become VT-ANI when it is delivered to Air India, performed its flight as BOE237 (Boeing 237). The almost four hour test flight (see flight track here) was piloted by Tim Berg and Randy Neville took off from Charleston International Airport. The flight test profile tested the airplane’s controls and systems in a series of scenarios designed to verify the airplane operates as designed. The tests occurred in all stages of flight beginning prior to taxi, through final landing and taxi.

During the flight, the crew checked the functionality of onboard systems at high and medium altitudes. They also checked backup and critical safety elements including cabin pressurization, avionics, and navigation and communications systems. In addition, they shut down and re-started each engine during flight.

After the flight, Tim Berg declared

“The airplane performed exactly as we expected.”

The airplane will now be flown to Fort Worth, Texas to be painted with Air India’s livery before returning to Boeing South Carolina for delivery, currently planned for sometime in 2012.

A electronics and automotive product management, marketing and branding expert, he was awarded a silver medal at the Lockheed Martin innovation competition 2010. He is ranked 6th on Mashable's list of aviation pros on Twitter and in addition to Bangalore Aviation, he has contributed to leading publications like Aviation Week, Conde Nast Traveller India, The Economic Times, and The Mint (a Wall Street Journal content partner). He remains a frequent flier and shares the good, the bad, and the ugly about the Indian aviation industry without fear or favour.
@BLRAviation
Previous Infographics: April Data for the Indian Airline Market
Next Photo: A350 XWB static airframe fuselage roll-out at the Airbus Final Assembly Line