An explanation of the festival of Diwali

Devesh Agarwal November 5, 2010 Uncategorized Comments Off on An explanation of the festival of Diwali

Since yesterday, India and Indians across the world are celebrating the festival of light — Diwali or Deepavali – the most significant festival in India.

The closest equivalent I can think of is in the US, the period between Thanksgiving and Christmas. Since the Dussehra festival last month, there have been sales across the land, with people shopping away much to the retailers’ delight.

Diwali is the abbreviation of the Sanskrit word “Deepavali” – Deepa meaning light and Avali, meaning a row signifying the row of lights which form the festival’s main attraction. The lamps symbolises the the light of knowledge vanquishing the darkness of ignorance that subdues humanity. 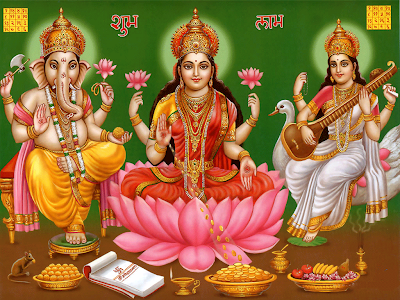 The celebrations are typically spread over five days. Commencing on the last two days of the seventh month of the Hindu lunar month – Ashwin, and continuing on the new month of Kartik. All the days except Diwali are named according to their designation in the Hindu lunar calendar. The calendar is broken in to two blocks of 14 days each which marks the lunar cycle.

Dhanatrayodashi or Dhan teras : Dhan means “wealth” and Trayodashi or Teras means “13th day”. Thus, as the name implies, this day falls on the 13th day of the second half of the lunar month. It is considered an auspicious day for shopping of utensils and gold based on the belief that on this day Amrit – the nectar of immortality came out during the churning of the great ocean by the gods and the demons. Hindus regardless of economic standing will buy some “capital” item for the home, be it jewellery, silverware, or even a simple stainless steel vessel.

Naraka Chaturdashi: Chatur means fourteenth dashi means day, on which the demon Narakasura was killed by lord Krishna – an incarnation of god Vishnu (the preserver of life). This day is also called Kali Chaudas. The strength to protect others is referred as Kali or Mahakali. Chaudas again means fourteenth day. It is believed that on this day the goddess Kali killed the wickedest.

In north India this day is also called “Chhoti Diwali” – “chhoti” meaning small, marked by the lighting of 11 lamps. In south India, this is the actual day of festivities with many waking up well before dawn, having a fragrant oil bath and wearing new clothes and performing special prayers to lord Krishna or Vishnu for liberating the world from evil. After the puja, children burst firecrackers heralding the defeat of the demon. As this is a day of rejoicing, many will have very elaborate breakfasts and lunches and meet family and friends.

Lakshmi Puja : This day marks the most important day of Diwali celebrations in North India. At sunset there is a special worship of lord Ganesh, the elephant headed god of wisdom and remover of obstacles, Lakshmi , the goddess of wealth, Saraswati , the goddess of knowledge, and lord Vishnu, the preserver of life. 21 oil lamps are lit, including one of clarified butter which will burn all night long, followed by a grand dinner with family and friends. Crackers and fireworks last long in to the night signifying the celebration to welcome prosperity and well-being.

Bali Pratipada or Balipadyami: In North India, this day is celebrated as the “new year” by the trading community since the Lakshmi Puja used to traditionally mark the end of the financial year. The homes and offices of friends and family are visited to offer greetings. In the south, this day commemorates the victory of Vishnu in his dwarf form Vamana over the generous yet demon-king Bali, who was pushed to the nether world and the return of Bali to earth from the nether-world.

Bhaiduj: On this day, brothers visit their sisters to express their love and affection for each other building on the aspect of most Indian festivals — bringing together families. In north India traditionally girls would be married to boys of distant villages. In a time when there were no long distance communications, Bhaiduj ensured the well being of the sister when the brothers would visit along with gifts for the in-laws. This festival is ancient, and pre-dates the festival of ‘Raksha Bandhan‘ where the married sister returns to visit her parents’ home, to be pampered, and to tie “rakhi” to her brother.

A electronics and automotive product management, marketing and branding expert, he was awarded a silver medal at the Lockheed Martin innovation competition 2010. He is ranked 6th on Mashable's list of aviation pros on Twitter and in addition to Bangalore Aviation, he has contributed to leading publications like Aviation Week, Conde Nast Traveller India, The Economic Times, and The Mint (a Wall Street Journal content partner). He remains a frequent flier and shares the good, the bad, and the ugly about the Indian aviation industry without fear or favour.
@BLRAviation
Previous Video: A White House first. President Obama’s Diwali greetings
Next Photo: Malaysia Airlines new livery Boeing 737-800

Video discussion: The recent spate of airline accidents. A cause for worry? #MH17

Emirates to commence A380 service to London Gatwick