Next Generation Ground Based Augmentation System (GBAS) to use global positioning data to pinpoint aircraft positions, rather than Old Generation radar

Newark Liberty International Airport will become the nation’s first major hub to test a new satellite navigation technology to help reduce flight delays, under an agreement approved today by the Port Authority’s board of commissioners.

Such a program will benefit Newark Liberty, which has been plagued for years by congestion and has consistently ranked near the bottom of the nation’s busiest airports in terms of on-time arrivals.

The Port Authority has authorized an estimated $2.5 million to cover the costs and oversee a contract with Honeywell to buy, install and maintain the GBAS system. Honeywell is the only FAA-certified provider of the system.

Continental will invest approximately $1.1 million to outfit 15 planes with GBAS equipment and train pilots to use the system. The FAA has committed as much as $2.5 million to assess the technology and expand its use.

“Satellite navigation has tremendous accuracy and integrity for civil navigation, creating far more efficiency than radar in processing planes and they do not have the obstruction issues that radio waves [used by radar] have,”

“Right now full implementation of satellite navigation in the U.S. and elsewhere to meet future demands and avoid gridlock in the sky is a number of years away and dependent on the expenditure of billions of dollars by the FAA for technologies that will serve as its backbone,”

GBAS, however, is ready to be tested now. The system utilizes a series of antennas and receivers set around the airport’s grounds and a VHF “datalink” to navigational satellites, which communicate together on aircraft position. Sensors are used to bolster the accuracy, availability and reliability of the satellite signals. The technology is particularly beneficial in low visibility landing conditions.

India is already underway, implementing a similar, but Satellite based, system called GAGAN (GPS Aided Geo Augmented Navigation), which is due for completion in May 2011.

A electronics and automotive product management, marketing and branding expert, he was awarded a silver medal at the Lockheed Martin innovation competition 2010. He is ranked 6th on Mashable's list of aviation pros on Twitter and in addition to Bangalore Aviation, he has contributed to leading publications like Aviation Week, Conde Nast Traveller India, The Economic Times, and The Mint (a Wall Street Journal content partner). He remains a frequent flier and shares the good, the bad, and the ugly about the Indian aviation industry without fear or favour.
@BLRAviation
Previous Airbus A320 with blended winglets
Next British Airways Qantas end merger talks 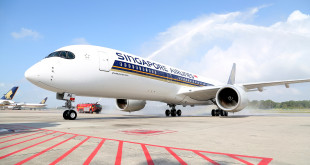