AirAsia, a low-cost carrier from Malayasia, has announced that it will commence its daily direct flight to Tiruchirappalli, India from Kuala Lumpur, Malaysia beginning 1st December 2008. Employing a brand new fleet of Airbus A320, Tiruchirappalli will be the first route to be launched by AirAsia in India.

To celebrate the launch of this new service, AirAsia is offering an unbeatable low fare starting from Rs. 699* (RM49*) one-way. This offer is available online exclusively at AirAsia’s website, www.airasia.com for the booking period from 30 October, 2008 – 9 November, 2008, for travel anytime between December 1, 2008 – July 31, 2009.

With AirAsia offering an extensive route network encompassing over 108 routes in Asia, including the ones served by AirAsia X, its long-haul affiliate to Gold Coast, Perth, Melbourne, Australia and Hangzhou, China, it is now more convenient than ever to fly to Kuala Lumpur from Tiruchirappalli in the South Indian State of Tamil Nadu. Moreover as compared to other budget carriers, the route network offered by this award-winning airline is the most extensive in the region. This will translate into a low-cost yet efficient travel experience for customers who would benefit from using the LCC Terminal in Kuala Lumpur to connect to other regional ASEAN cities or long haul sectors serviced by AirAsia X.

Dato’ Sri Tony Fernandes, Group CEO of AirAsia Berhad commented “AirAsia’s low-cost model, with its ultra low fares and modern fleet of comfortable and spacious aircraft, is undoubtedly an attractive consumer proposition, strong enough to compete with premium airlines. Besides features such as our brand new modern fleet fitted with leather seats and spacious cabin, a variety of hot delicious meals, simple, no-frills but convenient and renowned customer service, friendly cabin crew, largest number of destinations serviced along with the highest flight frequencies and an unrivalled On Time Guarantee, establish AirAsia’s position as the best low-fare airline when it comes to offering customers the absolutely best-in-class travel value”

He also informed that “we (Air Asia) are looking into other locations in India within the next one-and-a-half years. These include Chennai, Cochin, Kolkata, Bangalore and Hyderabad for AirAsia while for AirAsia X, we are looking at New Delhi, and Mumbai.”

* All fares quoted are excluding airport taxes, fuel surcharges and fees, and are applicable for one-way travel only.

A electronics and automotive product management, marketing and branding expert, he was awarded a silver medal at the Lockheed Martin innovation competition 2010. He is ranked 6th on Mashable's list of aviation pros on Twitter and in addition to Bangalore Aviation, he has contributed to leading publications like Aviation Week, Conde Nast Traveller India, The Economic Times, and The Mint (a Wall Street Journal content partner). He remains a frequent flier and shares the good, the bad, and the ugly about the Indian aviation industry without fear or favour.
@BLRAviation
Previous Man cheats death under Mumbai local train
Next Air India Airbus 310 tilts and scrapes wing on runway during landing 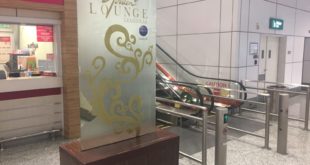