August 4, 2020 Comments Off on Airline hubs are facing a huge challenge 77 Views

The Corona pandemic continues to impact traffic volumes across the globes. Airports that were once bursting at the seams are now eerily silent while many of the terminals remain empty. Runways that would count seconds until the next arrival and departure now wait longingly for aircraft to alight. The buzz of jet engines has been interspersed with large periods of silence. And for hub airports such as Singapore’s Changi, Bangkoks Survanabhumi or even Delhi’s Indira Gandhi International Airport – the challenge has just begun.

An airline hub is an airport that serves as a connecting point and the use of a hub airport enables airlines to consolidate large volumes of traffic at a single location. This, in turn, enables airlines to significantly expand their networks. Global airline traffic continues to be dependent on hubs and of the 4.9 billion passenger trips that were flown in 2019, more than 70% of international traffic connected via hubs. These hubs are spread out across the globe and leverage their geostrategic locations to their advantage. 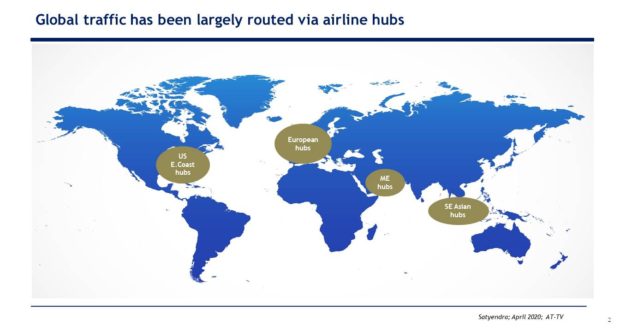 The evolution of airline hubs

Looking back, the first airline hub was started in the late 1970s started by Delta Airlines. Since then airlines have used the hub concept to their advantage. Effectively airlines figured out that rather than flying routes on a point-to-point basis it was beneficial to fly to a central airport and then connect it to several cities. This enabled economies of scale, improved connectivity, the ability to consolidate passengers and cargo, cost advantages by amortizing costs over concentrated flight volumes and employment & output multipliers for the cities where the hubs were located.

Since then hubs only continued to grow. Traffic volumes rose, cash-flows that are intrinsically linked to traffic volumes were strong and there was a challenge of capacity keeping up with demand. This was true across the globe. Particularly important was the fact that airports could handle traffic volumes that were far in excess of their own cities’ population base. For city-states like Singapore and Dubai, the hubs became strategic assets and indeed the success of these cities can often be traced back to the success of their airline hubs coupled with a strong anchor airline.

India also worked towards leveraging its ideal location and aspired to be a hub (while missing the element of a strong anchor carrier which continues to haunt the market till date). In late 2000s challenges started to emerge with the hub concept. This was largely driven by the advent of low-cost airlines (LCCs) whose business models were built on shorter point to point flights. Effectively the airlines would bypass hubs or use them to source traffic. The runaway success of LCCs especially in Asian markets led to their passenger volumes showing exponential growth and full-service airlines began to suffer.

Overseas hubs continued to grow and prosper at the expense of Indian aviation. The challenge was compounded due to bad policy, short-termism, the lack of an anchor carrier and also the success of the Middle East Hubs.

Fastforward to the present day and new trends have started to emerge. Chief amongst these is sustainability. And airlines have been labelled the chief culprits of unsustainability. Movements such as flyskgam (literally meaning flight shaming – an environmental movement that encouraged folks not to take flights) and tagskryt (literally meaning train bragging – a movement that encouraged folks to take trains over flights) have gained traction in Europe.

And it is only a matter of time before these make their way to India. Governments too are looking at additional tax measures towards sustainability and to ensure that the aviation carbon footprint is minimized.

If that wasn’t challenging enough for hub airports – aircraft manufacturers have started to produce smaller aircraft that are capable of flying greater distances.

Overall the hub concept was and is facing several challenges. These were however for the most part manageable. That was until the corona impact.

The pandemic has changed everything

In one fell swoop, a contagion spread via a 120-nanometer particle (SARS-CoV-2 virus) brought forward all these changes. Along with total evaporation of demand which is expected to fall by 50% in optimistic case scenarios. Those who fly will want to fly direct rather than connect via hubs. As such the pandemic is forcing a rethink of the entire hub concept.

Hubs by their very nature require large volumes and for the near future, the volumes are just not coming. As far as travel is concerned there is likely to be segmentation into essential travel and non-essential travel. Considering all the risks, the perception of the safest mode of transport may change from air-travel to rail to one’s own vehicle.

In the leisure segment, one is likely to see road trips as opposed to mileage runs (a mileage run is a popular term where frequent travellers use their miles for leisure travel especially as the miles are about to lapse). Overall, the perception of air-travel is undergoing a change: from one of convenience to one of risk. According to various forecasts including that by IATA, traffic volumes may take years to rebound.

For airlines, this means revisiting their entire network and fleet plans and adapting to a new reality. Above all, the hub concept will need to be adapted. Airline hubs are facing their greatest challenge till date.