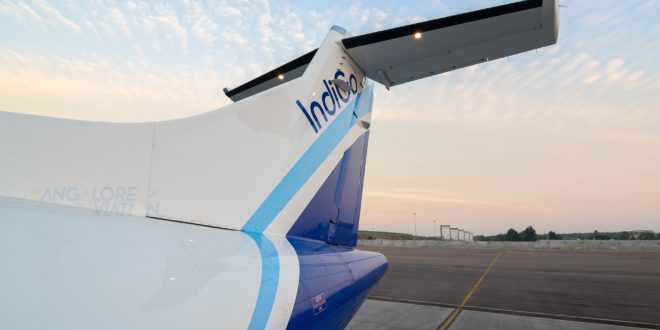 January 29, 2018 Comments Off on Analysis: Indigo third quarter FY2018 results. A leader in every way. 7 Views

As in the previous quarter, financial performance was driven by market growth and better yield management. Despite an increase in costs, the strength of the quarter allowed corresponding fares realised being higher.

Ancillary revenue was particularly strong registering growth of 20%. Recovery in cargo demand led to to better cargo revenue. Other operating income also rose to 307% of revenue and this is likely credits received from the manufacturer of aircraft and engines.

Overall cost per available seat kilometre increased by 3.9%. While overall costs we kept in line, much of the increase was driven by increasing fuel costs which was up 12.6% compared to the same quarter last fiscal. The increasing fuel prices will have an impact at some point in the future.

Indigo also paid out about ₹150 crores towards taxes on re-import of aircraft engines. IndiGo is contesting this policy and has paid this amount under protest. They are counting that this amount will be credited back to them at a later stage.

The point of contention is the rate of Goods and Services Tax (GST) that is being applied. Initially the rate was 10%, subsequently revised to 5%. However, Indigo (and other airlines) stress that that engine re-imports are sent overseas for maintenance and brought back and therefore should be exempt from GST.

Indigo took delivery of eight Airbus A320neo aircraft in the quarter. With 32 A320neo the airline remains the largest A320neo operator in the world. The NEOs which constitute 21% of the IndiGo fleet, are displaying operational stability and fly most of the network routes.

The quarter saw the induction of three ATR72-600 aircraft towards the end of December. Our very own Vedant Agarwal flew the 1st ATR flight (read more about it here). As predicted, these were based out of Hyderabad and deployed on Southern routes including Bengaluru, Mangaluru, Tirupati, and Vijayawada.

Between December 2017 and 2019 IndiGo expects to take delivery of 21 ATR aircraft, which will comprise five per cent of total capacity.

With the ATRs Indigo has significantly strengthened its presence in the South and will continue to build additional connectivity. Watch out for a price war with SpiceJet as they target similar routes.

The ATRs have a different cost structure to it is expected that Indigo’s CASK will creep up more. The next few quarters which show us by how much.

A market leader in every way

Indigo continued to be the market leader in terms of capacity, frequency and schedules, sales, cost position and profitability. Competition was limited at best.

On the full service side, Jet Airways, Vistara and Air India simply cannot match the capacity connectivity and consistency that Indigo is providing at this time. IndiGo has made significant inroads in to the business travel market, taking share away from the three full service carriers.

Jet Airways though has a fabulous frequent flyer program which will continue to deliver in the near future. Vistara is hobbled by a Delhi-based network which still does not offer direct inter-metro connectivity.

International flights are also delivering a significant challenge and one will likely see Jet Airways respond to this fairly quickly. With its more competitive cost base, Indigo is pulling traffic away from Jet’s most lucrative short-haul international routes and thus will be confirmed in the earnings call with Jet Airways.

If we believe media reports, this time next year will see IndiGo wide-body Airbus A330s on longer routes to Europe. Expect Jet to counter with an equity sale to Delta Air Lines and Air France-KLM. The possibility of Jet entering the SkyTeam alliance within 2018 is a distinct possibility.

When it comes to its low cost competitors, Indigo’s pricing continued to be extremely competitive giving SpiceJet, GoAir and AirAsia a run for their money. SpiceJet by virtue of its regional fleet services several smaller cities where it commands a yield premium. For instance, Bengaluru Hubbali or Delhi Gorakhpur which are short flights but command fares that are almost double that of the bitterly contested Delhi Mumbai route. This advantage will soon be challenged with Indigo’s ATR fleet.

The quarter of the PR disaster

We would be remiss to mention the public relations disaster Indigo had on its hands during this quarter. The image of a passenger being physically restrained by Indigo staff resulted in a torrid fortnight for the airline in the first half of November.

While the market seems to have shrugged off this fiasco, it did lead to a parliamentary hearing with a scathing report that targeted airline and their staff. Some of the recommendations in the report involve fare regulation, penalties for non-compliance and additional training spend. These are yet to be formally made into policy though.

While the airline did disclose information on the incident and accept fault, (read our story here), it was too late and appeared to be under extreme pressure of authorities. It did not help that the airline’s leadership was noticeably absent.

We compare the situation to the very public presence and reassuring leadership exhibited by AirAsia boss Tony Fernandes in the aftermath of the crash of QZ8501. IndiGo may be the master of the market, but crisis handling is something it should improve.

May be IndiGo gauged the short-term memory of India correctly. Despite the calls of outrage, passengers continued to fly Indigo. The airline carried four million passengers a month with no signs of slowing down. It is now listed in the global ‘Mega Airlines’ ‘top 20’ list of OAG Aviation. Load factors were a healthy 88.5% which is remarkable given the capacity being put into the market by all airlines, especially IndiGo. On time performance was a respectable 81.5%.

Again a good quarter overall. If the stock price movement is to be seen, it seems that the analyst estimates were even higher. The final quarter and the coming year will see several changes in the market – largely driven by aggressive capacity induction and also the white elephant that is Air India changing hands. As always Bangalore Aviation will be the first to bring you updates.

As usual, we invite you to share your thoughts, analysis, feedback, bouquets and brickbats, via a comment.

This analysis was done by an external industry analyst. The editor and publisher of Bangalore Aviation, Devesh Agarwal, is a shareholder of IndiGo in his individual capacity.