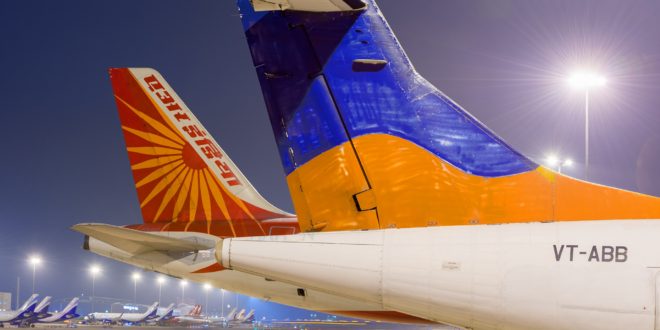 Tails of Air India and it's old subsidiary Alliance Air.

5 bidders were awarded routes under th;e regional connectivity scheme called UDAN and announced this Thursday. The selected bidders were

These airlines collectively are scheduled to fly 128 RCS routes connecting the North, South, East and West parts of the countries with unserved and underserved cities.  Bangalore Aviation has been looking at the scheme closely and presents an analysis of the implementation challenges that the government may have overlooked:

Of the 5 awardees only 3 have AOCs. While the government indicates that they will fast-track AOC in a period of as little as 4 months, the AOC approval process is detailed and cubmersome. As such this target seems to be highly optimistic. Additionally, carriers like Air Deccan will have to acquire aircraft which itself can be a lengthy process.

Routes have been awarded out of Mumbai and Delhi where peak slots are not to be had (Mumbai indicates they are completely out of slots). One wonders how these new slots will be awarded and on what basis they would be taken away from existing operators. Additionally, slower airplanes will impact already constrained runway capacity due to higher separation requirements and slower runway exits. Since majority of RCS routes are VFR routes (Visual Flight) the slots would have to be day-time slots. Bangalore Aviation’s assessment is that the slots will most likely be afternoon slots.

The scheme puts a cap on airfares on the RCS seats (which are 50% of the aircraft capacity to a maximum of 40). The cap is INR 2500/ hour but no process of determining RCS seats has been confirmed. For instance, how does the airline determine whether to sell an RCS seat or not? Further, in travel distribution seats can be bought upfront and sold later at a much higher premium – what mechanism the govt has to ensure this does not happen is pending? What about last minute bookings – this will almost always be non-RCS but given the nature of travel last-minute seats see a fair share of “urgent” travel most importantly medical travel which will likely bring up complaints and is against the very intent of the scheme (connectivity).

While the government is providing viability gap funding to the carriers to address the financial viability, operational viability is another matter. Operational viability includes talent, technology and contracts and with the growth forecast in the domestic market the demand for pilots, engineers and management personnel remains very high. If the regional carriers bring in foreign talent it further drives up the cost making the operations unviable. Other challenges remain –  majority of RCS airports are VFR (Visual Flight only)  makes them inaccessible during weather conditions such as fog or limited visibility. Defense airfields pose additional challenges as they have very specific requirements and foreign pilots may not be allowed to operate to such airfields.

Subsidy to airlines is provided via the Viability Gap Fund which in turn is funded via a surcharge to existing airline passengers flying non-RCS routes. This charge dependent on sector length. On the longer metro sectors it is to be INR 8000 per flight. This will likely be passed on by the airlines. Assuming a 160 seat aircraft and an industry load factor of 82% (as of March 2017), the charge works out to INR 60 – INR65 per passenger. However, no mechanism exists to ensure passengers are not overcharged (it is likely that airlines will collect in excess of the levy). How the excess charges are accounted for is yet to be ascertained. Mechanism and timelines for disbursement of funds is also yet to be ascertained.

The passage of the GST will lead to a 18% rise in airfares (if passed on entirely by airlines). This coupled with rising fuel costs and AAI charges (10% increase) may hamper demand. Add to that the RCS levy and it is almost certain that the airlines will cry foul.

Significantly, the success of RCS depends on the state lowering tax rates and providing security at airports. Each state has to agree to this – and it may not be as simple as the center has envisioned it to be. Additionally several of the airports need rehabilitation and this is at best a multi-year process (given the nature of airport development in India)

The RCS is no doubt a step in the right direction, unless implementation is closely looked into and monitored, this has the potential to become yet another arcane policy that may have a very different impact than intended (similar to the 5/20 – five year and twenty aircraft to fly international and Route Dispersal Guidelines).